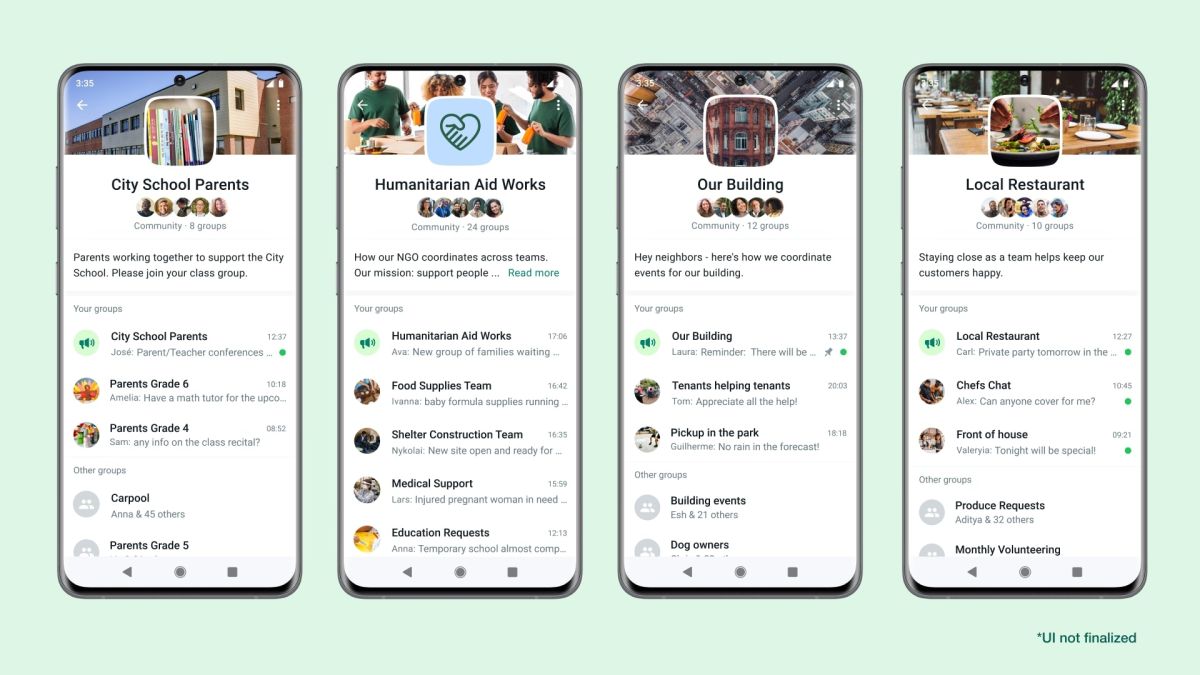 What you need to know

Unlike Telegram, WhatsApp hasn’t been getting a lot of love from its parent company in recent times. That is changing today, as the Meta-owned service has officially announced the previously rumored Communities tab, along with a bunch of new improvements to how people communicate with focus groups.

The new announcement comes hot on the heels of a recent discovery that hinted at the feature’s arrival in a future update. Indeed, the Communities tab allows users to “bring together separate groups under one umbrella,” according to WhatsApp.

“We built WhatsApp Communities to make it much easier to organize all your group chats and find information,” Meta CEO Mark Zuckerberg said in a Facebook post. “You’ll be able to bring different groups together into one community — for example, in addition to individual groups for different classes, you might have one overall community for parents at a school with a central place for announcements and tools for admins.”

The new tab is also optional, which means you can be in a group but not a community. WhatsApp said in a blog post that the feature was created in response to the growing reliance on group chats by schools, local clubs, and non-profit organizations.

“Given lots of feedback we’ve received, we think there’s more we can do to make it easier to help people manage these busy conversations among these kinds of groups,” the company added.

However, only admins will be able to create and manage Communities, as well as choose which groups become part of their community by linking or unlinking them. Admins will also have access to a bunch of new tools, including the ability to send announcement messages to every member of a community.

That said, WhatsApp doesn’t have specific details on when the new feature will become available on one of the best messaging apps. The service said it will be testing Communities over the next few months before launching the new tab globally.

When asked by Android Central whether Communities will result in the transition of groups from the chat screen to the new location, a WhatsApp representative said it won’t change the current group chat experience.

Instead, the group feature is picking up a bunch of new improvements that will change how people communicate with groups and reduce clutter in large conversations.

Over the coming weeks, group chat members will be able to respond to messages with emoji reactions. This helps to avoid flooding chats with fully-written responses to group messages. WhatsApp also confirmed that it’s raising the file sharing limit to a maximum of 2GB, up from the current cap of 100MB.

Another upcoming change for groups is the ability for admins to delete “problematic messages from everyone’s chats.”

The service is also increasing the number of people who can join a voice call to 32. Currently, WhatsApp’s voice calling feature only allows up to 8 participants.

All of these changes will come to WhatsApp groups regardless of whether or not they’re part of a community. These updates will also arrive prior to the launch of Communities.

“While other apps are building chats for hundreds of thousands of people, we’re choosing to focus on supporting the groups that are part of our daily lives,” WhatsApp said.

Aside from WhatsApp, Zuckerberg also vowed to develop community messaging features for Messenger, Facebook, and Instagram in the future.