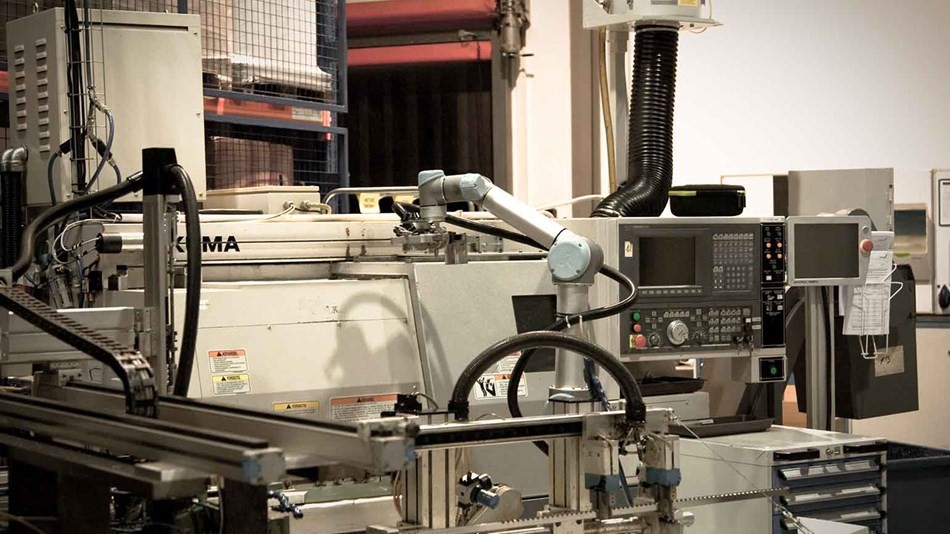 You may have encountered the terms ‘robotics’ and ‘automation’ being used interchangeably, but there are some important differences between the terms and what they mean. In this article we’ll look at those differences and explore some of the ways in which collaborative robots have transformed the worlds of traditional robotics and manufacturing.

What is the difference between robotics and automation?

In traditional terms, automation is a very broad category that refers to the use of software, machines and devices that are designed to perform tasks usually performed by humans. For example, business process automation is software designed to improve business processes. Meanwhile, robotic process automation (RPA) refers to software agents (or software robots) with AI and machine learning capabilities that can use computer software like a human would. You may be asking “Who uses robotic process automation?’ RPA is used to automate labor intensive workflow, infrastructure and back office processes, making them a great fit for large companies with large scale human resources, IT and finance departments.

The term ‘robotics’ specifically relates to machines that can see, sense, actuate and, with varying degrees of autonomy, make decisions. It is also a broad category, encompassing drones, service robots and Mars rovers, but in the context of traditional robotics and manufacturing, the machines being referred to here are industrial robots. Industrial robots are physical hardware and are used to inspect, assemble, package and palletize physical products. Automation is a term that includes software agents with no hardware, and robotics is best understood as a sub-category of automation.

What is automation and robotics engineering?

A niche product just a decade ago, cobots are now the fastest growing segment of the global industrial robotics market. A recent report from the International Federation of Robotics found that cobot installations grew by 11% in 2019, “in contrast to the overall trend with traditional industrial robots.” Why are cobots growing in popularity?

Cobots differ from traditional industrial automation in several important ways. While traditional automation is characterized by fixed hardware designed to handle one specific product part, cobots are designed to be mobile and easy to reprogram to run on different tasks. This means that manufacturers using cobots can handle high mix/low volume production batches without having to make huge changes to their automation setup. Traditional robots may perform superbly at a specific task, but cobots offer great flexibility and the potential for widespread redeployment throughout your manufacturing facility. It may take weeks or months to change traditional, static automation just to accommodate slight product differences; a cobot can be reprogrammed to handle new parts within hours. Similarly, traditional automation tends to be developed for a single purpose or application, whereas cobots can be used on different types of applications from assembly to quality inspection to welding.

Traditional robots are difficult to program, often requiring expert coders at great expense. By contrast, cobots are designed for ease of use. Because they are easy to use, cobots remove a major barrier to automation adoption among small-to-medium size businesses. Traditional automation often requires engineering and/or robotics experience and can take weeks to complete, whereas end users are ready to use cobots from Universal Robots after taking a short online training course through the Universal Robots Academy. For example, ASSA ABLOY, a New Zealand-based company that specializes in door and window opening solutions, evaluated three industrial robot arms to see how well they performed lock assembly and screwing tasks. Eventually the company selected a UR5 because its “ease of programming was unmatched.”