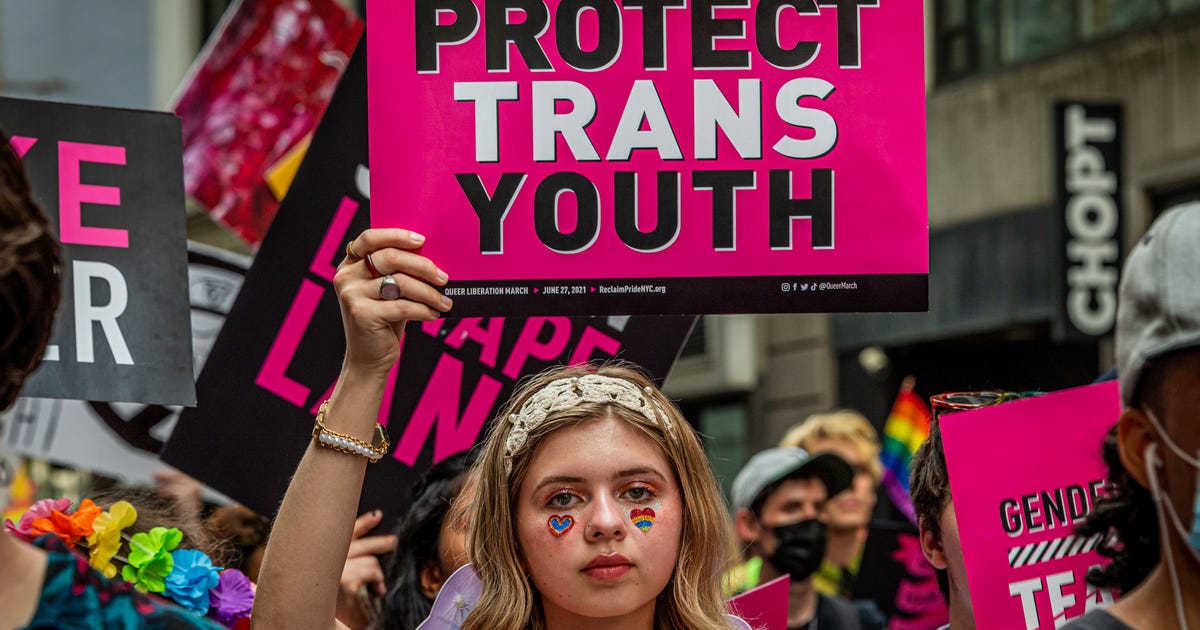 Thursday is International Transgender Day of Visibility, aimed at celebrating trans people’s accomplishments and raising awareness at the work that still needs to be done to achieve equality.

But only three months in, 2022 is already on track to see a record number of anti-transgender measures introduced in state legislatures across the country. Driven by Republican lawmakers, the bills have earned little bipartisan support and promise to remain a wedge issue in the midterm elections.

At least 130 bills are under consideration this year in 32 states, according to the Human Rights Campaign, the country’s largest LGBTQ advocacy group.

One of the most notable became law on Monday, when Florida Gov. Ron DeSantis signed a bill prohibiting discussion of gender identity or sexual orientation in primary schools. It has sparked fierce opposition, including a walkout by Disney employees angry that Bob Chapek, the company’s chief executive officer, did not initially take a public stance.

Here’s what you need to know about what’s developing around the country, including what the bills entail and which states are considering them.

Florida’s “Parental Rights in Education Act,” which opponents refer to as the Don’t Say Gay bill, prohibits discussion about sexual orientation or gender identity in kindergarten through third grade “or in a manner that is not age-appropriate or developmentally appropriate for students.”

At a signing ceremony surrounded by schoolchildren, DeSantis, a Republican, said, “We will make sure that parents can send their kids to school to get an education, not an indoctrination.”

But critics of the measure say the vagueness of its language leaves educators vulnerable, given that it allows parents to sue school districts if they believe the law has been violated.

“We’re staring at a new reality where LGBTQ+ students may wonder if they’re allowed to even acknowledge their own sexuality or gender identity,” Human Rights Campaign interim president Joni Madison said in a statement.

President Joe Biden has called the law “hateful,” but at least 15 other states are considering similar “Don’t Say Gay” measures. Many are framed as parents’ bill of rights or academic transparency measures.

Among five anti-LGBT bills before Oklahoma legislators is one that would prohibit librarians and teachers from discussing gender identity and another that would allow families to sue teachers for $10,000 if they promote positions “in opposition to the closely held religious beliefs of students.”

A bill in the Tennessee House would ban textbooks that “promote, normalize, support, or address” LGBT issues or “lifestyles.”

Legislators in Indiana have penned a bill requiring parents to give permission for any classroom discussion involving gender identity, sexual orientation, “transgenderism” or any aspect of human sexuality.

Roughly half of the anti-transgender legislation at the state level would prohibit trans youth from participating in school sports consistent with their gender identity, according to the Human Rights Campaign.

Lawmakers in at least 15 states are considering some form of a transgender-athlete ban, according to the legislative tracker from Freedom for All Americans, which advocates for LGBTQ equality.

Frequently, the language in the bills is aimed specifically at transgender girls in sports, not transgender boys. Last week, for example, the Kansas Senate passed a bill that requires “female student athletic teams only include members who are biologically female.”

Some Republicans have balked at the bills, too: GOP Gov. Eric Holcomb of Indiana vetoed a trans-athlete ban on March 23, saying the Legislature hadn’t demonstrated there was a problem that required government intervention.

But three days later Utah lawmakers overrode Republican Gov. Spencer Cox’s veto of the Student Eligibility in Scholastic Activities Act, which prohibits “a student of the male sex from competing against another school on a team designated for female students.”

Transgender girls in sports force young women “to compete with people who held a biological advantage that is not erased with any degree of transition procedures,” Rep. Kera Birkeland, the bill’s chief sponsor, wrote in an op-ed in the Deseret News. The law is slated to go into effect on July 1.

In his veto letter, Gov. Cox said there were only four out trans kids playing high school sports in all of Utah.

“Four kids and only one of them is playing girls’ sports. That’s what this is all about,” he said. “Four kids who aren’t dominating or winning trophies or taking scholarships. Four kids who are just trying to find some friends and feel like they are a part of something…. Rarely has so much fear and anger been directed at so few.”

A similar ban, the Save Women’s Sports Act, passed in Arizona last week.

“Ignoring biological realities hurts girls and women who should not be forced to compete against men playing on women’s sports teams,” state Sen. Nancy Barto, a co-sponsor, told the Judiciary Committee.

Arizona Gov. Doug Ducey, a Republican, has not indicated if he will sign it.

Prohibition on transition-related care for minors

In April 2021, Arkansas became the first (and, to date, only) state to ban transition-related care for minors when the GOP-dominated legislature overrode Republican Gov. Asa Hutchinson’s veto of HB 1570, the Save Adolescents From Experimentation (SAFE) Act.

After the Texas Legislature failed to pass a transition-care ban in 2021, Gov. Greg Abbott issued an executive action in February ordering the state’s child welfare agency to treat gender-affirming medical care as felony child abuse. Members of the general public are empowered to report parents if it appears that their children are receiving such treatment.

“It’s against science and appalling abuse of executive power,” Oakley told CNET. Both Abbott’s order and the Arkansas law are being challenged in court.

At least 14 other states are looking to restrict access for minors, some with criminal penalties for medical providers and parents.

Alabama’s Vulnerable Child Compassion and Protection Act, which has cleared the state Senate and is now before the House, would make it a felony punishable by up to 10 years in prison and a $15,000 fine for a doctor to prescribe puberty-blockers or cross-sex hormones to someone under 18.

“Adults are free to do what they want to do, but this is to protect children. I consider it abuse to give these long-term drugs to these children,” the bill’s sponsor, Rep. Wesley Allen, told the House Judiciary Committee earlier this month, The Hill reported.

David Fuller, a sergeant with the Gadsden, Alabama, police department, said the doctors who helped his daughter transition when she was 16 saved her life.

“My big fear is the fact that they would be designated as criminals,” Fuller wrote in Mother Jones. “To imagine these people being arrested for everything they’ve done for my family makes me cringe.”

Similar legislation is being considered in Arizona, Georgia, Iowa, Kansas, Kentucky, Louisiana, Missouri, North Carolina, Ohio, South Carolina and Tennessee, according to the Williams Institute at the UCLA School of Law.

While sports bans and prohibition on medical care have been the most prolific and successful, there are also measures aiming at restricting access to restrooms, long a contentious issue at the state and local level, and prohibiting changes to gender markers on birth certificates.

Arizona’s HB 2161 would make it illegal for teachers or administrators to withhold information from a parent that is deemed relevant to their child’s wellbeing.

It specifically cites details about a student’s “purported gender identity or requested transition” if that identity “is incongruous with the student’s biological sex.”

School districts can be sued for noncompliance and teachers can lose their certification.

The bill’s sponsor, Rep. Steve Kaiser, says it’s not the school’s job to be a safe space for students.

Human Rights Campaign’s Oakley says bills like Kaiser’s work to “taking out the support for trans youth one by one.”

“Whether it’s parents and doctors, teammates, teachers or guidance counselors,” she added. “The goal is to contract and contract the support the kids have until they’re all alone.”