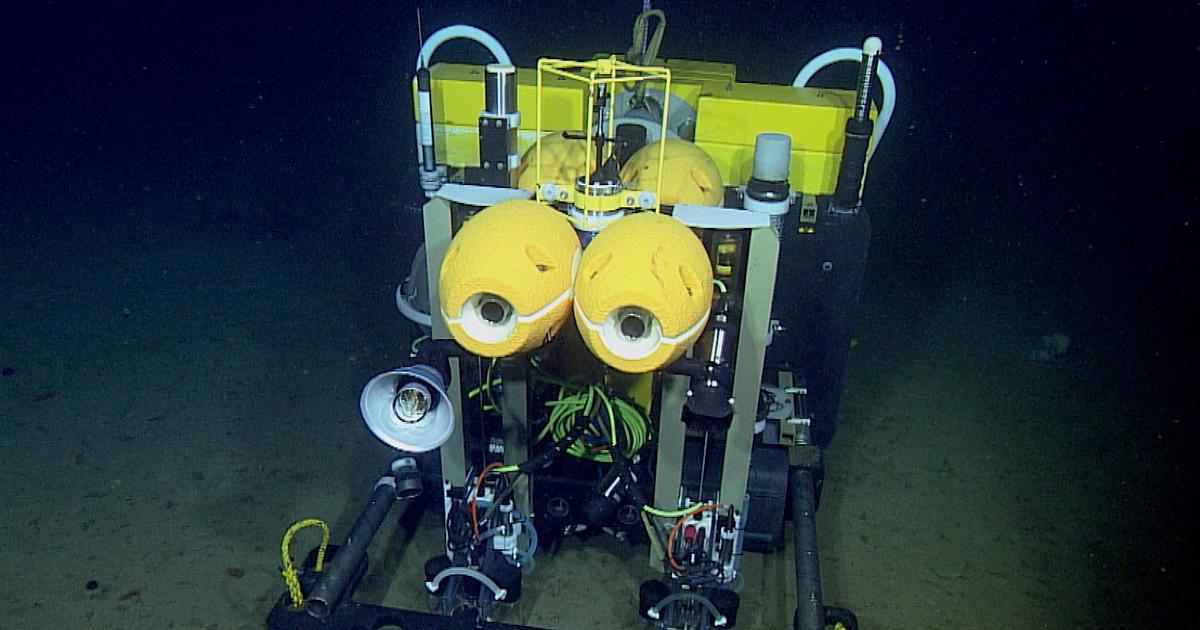 Although the deep ocean floor may seem isolated from life on the rest of the planet, it actually plays a vital role in the global carbon cycle. Scientists are now gaining a better understanding of that role, thanks to a tracked robotic underwater rover.

Known as the Benthic Rover II, the deep-sea autonomous vehicle was designed by a team at the Monterey Bay Aquarium Research Institute (MBARI).

For the past seven years, it has been continually in use at a site named Station M, located 225 km (140 miles) off the coast of central California. There, it’s been gathering data on the manner in which organisms on and in the abyssal seafloor recycle the carbon that continuously falls from above – that carbon is contained within organic matter such as dead plants and animals, and excreted waste.

At the start of each of its one-year cycles, the largely titanium-bodied rover is lowered into the water from the deck of a crewed surface support vessel, then released and allowed to fall 4,000 m (13,123 ft) down to the bottom – it’s rated to a maximum depth of 6,000 m (19,685 ft). Once it lands on its dual rubber tank-like tracks, it first checks the direction of the current, then proceeds to move forward to an undisturbed section of seafloor.

It subsequently sets about measuring the amount of freshly fallen phytoplankton and plant debris in the area, using a blue light that causes the chlorophyll in them to fluoresce. It also records the water temperature and oxygen concentration, plus it measures the oxygen consumption (and thus carbon dioxide output) of organisms living in the mud.

The latter is achieved utilizing two transparent respirometer chambers, which are lowered onto the mud then left in place for 48 hours. Once that time period is up and the chambers are raised, the rover moves forward by 10 m (32 ft) and performs all of the tests over again – it continues doing so for approximately one year, during which time it’s powered by onboard batteries.

Because the rover can’t transmit directly to the shore (radio waves don’t travel well through water), a Wave Glider autonomous surface vehicle travels out to Station M four times a year. The rover then transmits its location and operational status through the water in the form of acoustic pulses, which are picked up by the Glider – it in turn relays the information to the shore via satellite.

After a year, the rover is hauled back up to a ship on the surface, so its batteries can be changed, its recorded data can be downloaded, and any required maintenance can be performed. It’s then returned to the seabed.

In a recently-published paper, MBARI scientists have outlined some of the ways in which the Benthic Rover II has contributed to our knowledge of the abyssal seafloor. Among these is the discovery that between November 2015 and 2020, there was a large increase in the amount of dead phytoplankton and plant matter sinking to the bottom, accompanied by a decrease in dissolved oxygen in the water above the seabed.

The researchers state that if traditional short-term data-gathering equipment had been used, these changes would not have been detected.

You can see the rover in action, in the video below.