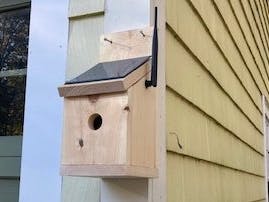 Mesh networks, unlike the more common hub-and-spoke networks, are modeled by independent nodes that each communicate to one or more other nodes to share data. Although Bluetooth mesh currently exists on a multitude of smart devices, its short range can be a major drawback, which is why Bruce MacKinnon came up with the WARS LoRa Birdhouse Project. Its custom network relies on a series of wireless nodes that each communicate with each other over a lower-frequency signal, and every node’s electronics are set within a birdhouse, meaning that digital, not audible, tweets can be sent over a large distance.

Each birdhouse was meant to be an autonomous node that contains a single +20dBm/100mW radio that operates on the 33cm ham radio band in order to carry a reasonable amount of data up to 1km away where it is then received by another radio. Because of the mesh architecture, the birdhouses run 24 hours per day, 7 days per week, and thus require a solar panel on their roofs along with an 18650 LiPo cell and charging module. An ESP32 handles the higher-level functions of the network such as routing, buffering messages, and acting as a translator between a USB host device and the wireless radio.

To keep things standardized and simple, each birdhouse was fashioned from just six pieces of wood that comprise the base, walls, front opening, and sloped roof. Once assembled, an antenna was attached to the side along with the 5V solar panel at the top. Their innocuous shape allows them to easily blend in with other scenery, including gardens, houses, and trees.

The most complicated part of this project was coming up with a reliable network that would be resilient enough to withstand the occasional dropped packet or deal with a node failing. At the edge of the network, a birdhouse station can receive data and commands from either a desktop station or a gateway station that communicates with the wider internet. Otherwise, all other nodes are simply repeaters that route a packet from one node to its destination.

Similar to the internet protocol (IP) running over some physical layer such as Ethernet or WiFi, MacKinnon’s protocol works by sending standard LoRa packets over the air. The packet holds a preamble, a header, a payload, and CRC information for use in error detection/correction. Within the payload is a custom WARS Birdhouse Mesh Packet that holds an ID, the packet’s type, call signs, and addresses for routing to the destination.

When it becomes time to send information from a desktop station to another one, a packet with type 32 (routine text traffic) is sent to the next node containing up to 128 bytes of ASCII-encoded text. From here, the stations will continue to route this packet until it reaches the other desktop station where the message can be printed. Apart from simple text, MacKinnon’s project includes many other types of packets as well, with several more being planned.

To read more about this project and view its code, you can visit its GitHub repository here.