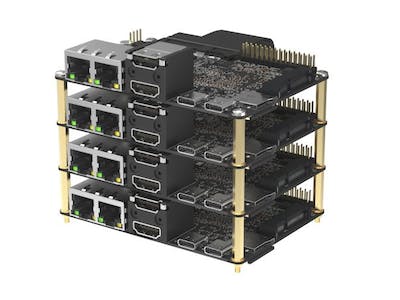 Internet of Things (IoT) hardware specialist Mixtile is preparing to launch a crowdfunding campaign for a compact Rockchip RK3588-based single-board computer designed with an eye towards cluster operation: the Mixtile Blade 3.

“Out-of-the-box, Mixtile Blade 3 is a stackable computer that can be connected in a cluster configuration through the onboard PCIe Gen3 edge connectors that integrate several high-performance hardware platforms in a small form factor,” the company claims of its design. “Working together, the hardware will deliver a network speed of up to 20Gbps and memory bandwidth of up to 136GB/s.”

Mixtile is preparing to launch a high-performance low-footprint single-board computer, the Blade 3. (📷: Mixtile)

The heart of the board is the Rockchip RK3588, an eight-core processor with four high-performance 2.4GHz Arm Cortex-A76 cores operating alongside four lower-power 1.8GHz Cortex-A55 cores. There’s an on-board neural processing unit (NPU) to accelerate edge AI workloads offering a claimed 6 TOPS peak compute performance, and configurations offering up to 32GB of LPDDR4 RAM and up to 256GB of eMMC storage alongside the microSD expansion slot.

Built to the pico-ITX form factor, the compact board is powered by a SATA power connector as a 12V input and offers a wealth of connectivity including HDMI 2.1 output at 8k60 and an HDMI 2.0 input at 4k60, a four-lane MIPI-DSI connector, a multi-function edge connector with four-lane PCI Express (PCIe) Gen. 3 and SATA 3.0, a mini-PCIe socket with PCIe Gen 2.1 and USB 2.0, dual USB 3.2 Gen. 1 Type-C ports offering DisplayPort 1.4a connectivity, and two network ports supporting 2.5-gig-Ethernet.

The board packs a lot of features into a small space, including HDMI input capabilities and PCIe Gen.3 expansion. (📷: Mixtile)

There’s also a general-purpose input/output (GPIO) header, shown as 30-pin in the company’s pre-production renders but described as 40-pin in its documentation, offering I2C, USB 2.0, UART, SPI, I2S, and CAN connectivity for hardware expansion. The software side, meanwhile, is a little unusual: The board is designed to run Linux, but as a guest to an Android host.

“Mixtile Blade 3 runs a hybrid Android and Linux distribution that operates Android 12 within a Linux container because of its prolific driver support, making the software development process easy,” the company explains. “The hardware will be shipped with a preloaded Android 12 operating system allowing developers to take full advantage of the board’s hardware features.”

Mixtile claims that the board is suitable for a range of use-cases, from edge computing in autonomous vehicles and the industrial IoT (IIoT) to high-density energy-efficient clusters scaling up to75 units with 600 CPU cores in a 2U chassis drawing under 1.5kW, but has yet to share one key piece of information: The price.

Interested parties can sign up to be notified when the crowdfunding campaign goes live on Crowd Supply, while more information is available on the company’s website and on its Hackster.io project page.