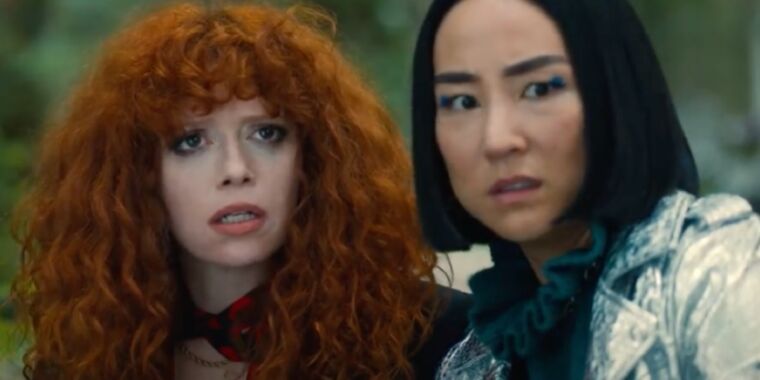 A mysterious portal through time opens up in the New York City subway in the first trailer for the second season of Russian Doll, Netflix’s Emmy Award-winning sci-fi dramedy that was an Ars Technica favorite in 2019. Co-stars Natasha Lyonne and Charlie Barnett (reprise their roles, and this time they face a different kind of supernatural phenomenon on their existential journey.

(Spoilers for the first season below.)

Co-created by Lyonne, Amy Poehler, and Leslye Headland, the season one plot centered on a chain-smoking game developer named Nadia Vulvokov (Lyonne), who died repeatedly the night of her 36th birthday party and kept looping back to the host’s funky East Village bathroom.

Naturally, Nadia wanted to get to the bottom of what was happening, although her sleuthing was hampered by repeated accidental deaths. Then she met a young man named Alan (Barnett) in an elevator who was also reliving the same day—the day when he proposed to his girlfriend only to discover she’d been having an affair. Soon Nadia and Alan realized there might be a crucial connection between them.

In the season finale, Nadia and Alan became trapped in two separate timelines, each contending with a version of the other who was unaware of the time loop connecting the original versions. Nadia saves the alternate version of Alan in her timeline, while Alan saves the alternate Nadia in his timeline, thereby breaking the loop. It’s implied in the final scene that the pair become friends in both timelines.

Season one deservedly received rave reviews when it debuted in 2019. “Russian Doll is a weird, ribald, thoroughly enjoyable ride that deserves every bit of the praise it has received,” I wrote in my review. “The sight gags and whip-smart dialogue are priceless. And much credit goes to Lyonne as its raspy-voiced star. She’s smart, tough, uncompromising, foul-mouthed, and unapologetic about her lifestyle, but haunted by past trauma and regret—and also capable of shining moments of generosity and selflessness.”

Season one was so perfect, I would have been happy for the series to end right there. But with Lyonne returning as both star and showrunner, odds are good the second season could be just as stellar—especially with the addition of Schitt’s Creek‘s Annie Murphy to the cast. Per the official premise:

Discovering a fate even worse than endless death, this season finds Nadia and Alan delving deeper into their pasts through an unexpected time portal located in one of Manhattan’s most notorious locations, the New York City subway. At first they experience this as an ever-expanding, era-spanning, intergenerational adventure, but they soon discover this extraordinary event might be more than they bargained for and, together, must search for a way out.

As the trailer opens, Nadia is in the subway when Horse (Brendan Sexton III), the homeless man she befriended in season one, shouts, “Is that your train?” Then Nadia wakes up in a subway car in the 1980s. When she informs Alan (now sporting a thin mustache) that she’s become a “time prisoner,” he naturally asks if he should be worried, given what transpired the last time Nadia’s reality started to warp. As she says, “Inexplicable things happening is my entire modus operandi.”

Things get pretty trippy from there, as Nadia ponders whether she and Alan have some unfinished business. At least part of the plot involves one family that “lost its gold twice on a train.” And it looks like Nadia’s BFF, Maxine (Greta Lee), will be getting in on the supernatural shenanigans as well.