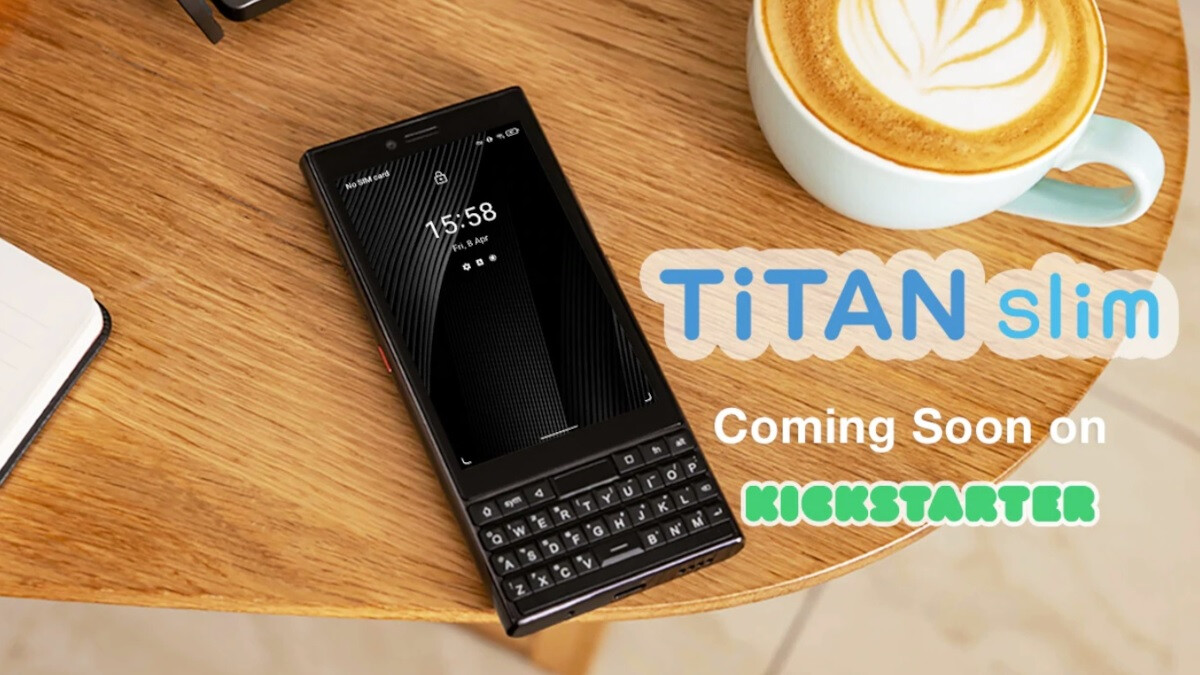 Just the other day we showed you a teaser tweeted by Unihertz, a phone designer with a penchant for developing Android-powered phones that feature a physical QWERTY and resemble BlackBerry models. The firm released the Unihertz Titan in 2019; this is an Android-powered handset with a similar look as the BlackBerry Passport right down to the latter’s 4.5-inch nearly square display and hybrid physical and touchscreen QWERTY keyboard.
Unihertz followed up with a smaller version of the Titan called the Titan Pocket. And while the company tried to cover up the aforementioned teaser it tweeted by covering up an image of its next phone with black ink, some Twitter users were able to defeat that covering which revealed that the design of the company’s upcoming handset resembles the BlackBerry KEY2 or the KEY2 LE.

On Monday, a Reddit thread (via PCMag) revealed rumored specs for the device which will be available first from Kickstarter even though it is not a crowdfunded project. Unihertz has used Kickstarter as a platform for pre-orders to make sure that it has an audience for its handsets.

The Titan Slim looks very much like the BlackBerry KEY2

According to the rumored specs, the phone, apparently called the Titan Slim, will sport a 4.3-inch display with a resolution of 760 x 1280 (which probably is a typo since a resolution of 720 x 1280 generates an aspect ratio of 16:9). Under the hood will be a basic MediaTek processor, and on the back will be a camera array led by a 48MP camera sensor. There will be a fingerprint scanner and a facial recognition system (most likely 2D which means that it will not be secure).

The Reddit post containing these specs has question marks next to entries stating that the Titan Slim will be powered by Android 11 and will carry up to 256GB of storage. The handset will supposedly have Dual Sim capabilities, and NFC connectivity, and the physical QWERTY can double as a trackpad. Some of the specs look questionable such as the screen resolution and the version of Bluetooth (4.1) listed.

Because of an issue that Unihertz phones have connecting to a 4G LTE signal over AT&T, those interested in the Titan Slim should know that the manufacturer is recommending that buyers of the device use T-Mobile or Verizon service. The company says that it is trying to work out this issue with the wireless provider.

The KEY2 was the more refined sequel to the BlackBerry KEYone and the KEY2 LE was a less expensive model that cut a few corners in order to bring the price down. Now that BlackBerry has sold all of its remaining phone-related assets and licensing the brand no longer seems possible, fans of phones with physical keyboards have seen their options shrink.

BlackBerry now focuses on cyber security software and there have been reports that CEO John Chen has absolutely no interest in licensing the BlackBerry name to third-party manufacturers. It has been a long, wild roller coaster journey for the company that was one of the world’s top smartphone brand for years. Owning a BlackBerry was a must in the business world since it allowed users to retrieve and respond to emails instantly.

BlackBerry has reinvented itself as a purveyor of cyber security software

When Steve Jobs introduced the iPhone at MacWorld in January 2007, it was the beginning of the end for BlackBerry although that didn’t happen instantly. The peak for BlackBerry took place in September 2013 as the firm had 85 million subscribers at that time. From that point moving forward, the number of ‘Berry subscribers started to shrink as the company could not get enough developers to create popular apps for ‘Berry users.

By the time BlackBerry switched to the Android platform with the BlackBerry Priv in 2015, the jig was up. That was the last BlackBerry model designed and manufactured by BlackBerry as the company then licensed the BlackBerry name and software to Chinese phone manufacturer TCL. That license expired in February 2020.