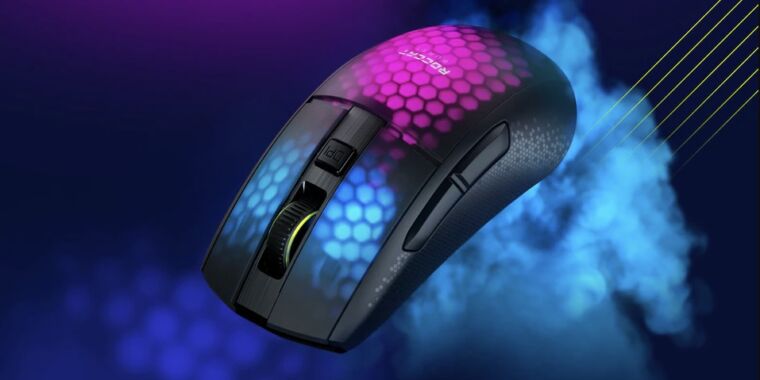 Some of the most advanced wireless mice are on the heftier side, making constantly pushing them around a lot of work. A lighter mouse, on the other hand, is easier to travel with. One trend has companies cutting holes into their mouse chassis to trim ounces, but the wireless gaming mouse Turtle Beach sub-brand Roccat announced today manages to lighten the weight and avoid honeycomb holes.

Roccat’s Burst Pro Air weighs 2.86 ounces (81 g), a big weight reduction compared to powerhouse wireless productivity mice, like the Logitech MX Master 3 (4.97 ounces / 141 g) and Razer Pro Click (3.73 ounces / 106 g). All three mice let you use a USB-A dongle for your wireless connection, as well as Bluetooth, and are rechargeable. But the Burst Pro Air’s weight class makes it a reasonable consideration for anyone tired of heavy mice. Those ounces can add up, whether you have a medical issue or have just been at the PC for a while.

Gaming brand Roccat designed the mouse for PC gamers who’ll be swiping, flinging, flicking, and clicking rapidly, taking the design from its wired Burst Pro. But unlike some other ultralight gaming mice, such as the Glorious Model O- Wireless (about 2.43 ounces / 69 g) or SteelSeries Aerox 3 Wireless (2.4 ounces / 68 g), the Burst Pro Air doesn’t have open gaps in its chassis.

Roccat’s 0.17-pound mouse does have holes in its design, but they’re covered by a thin, semi-transparent shell that helps prevent the openings from dust and grime. It’s still a jarring design, and if you’re not a gamer, it may easily clash with the rest of your PC setup.

But some of this gaming mouse’s features could also come in handy for non-players. This includes PTFE feet on the mouse’s underside that should help the mouse glide even more easily than its light weight affords. The ability to tweak DPI (dots per inch, see our PC mouse terms guide for more) settings means you can fine-tune control.

The Burst Pro Air has five onboard memory profiles, so you can bring five groups of settings, including button programmings, to any PC without downloading any software or inputting your preferences again.

You could also have specific profiles launch when you open specific apps, similar to the “app-specific customizations” Logitech offers in its advanced wireless mice. The new mouse also charges over everyone’s favorite USB port, USB-C.

However, a $100 price tag is high for a peripheral, especially for non-gamers. We won’t know if it’s worth the price unless we try the mouse.

For gamers, Roccat also equipped the mouse with a powerful optical sensor. It claims to support up to 19,000 DPI, velocity of up to 400 inches per second (IPS), and acceleration of up to 50 g. The mouse also works with Nvidia’s Reflex latency analyzer.

Roccat’s new wireless mouse has the kind of extreme specs that are commonplace in PC gaming. But with its light weight and a striking design that’s slightly less polarizing than gaming’s most daring, we wouldn’t blame non-gamers for giving it a peek, too.