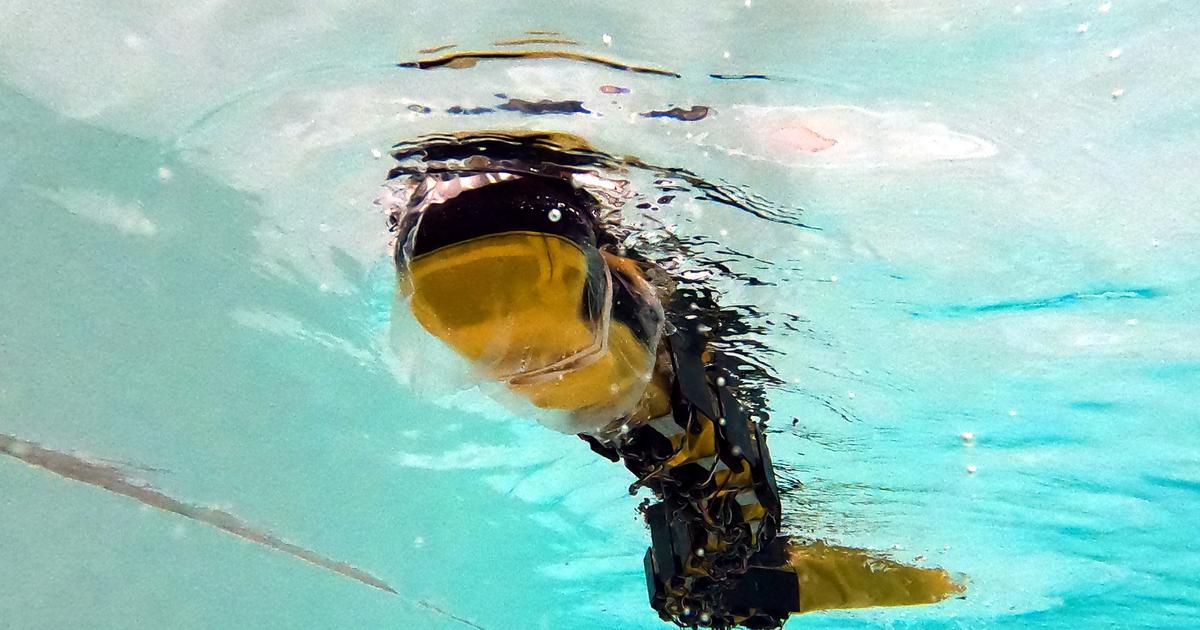 While we have seen eel-like swimming robots before, they’ve tended to simply copy the movements of their biological counterparts. AgnathaX is different, in that it utilizes simulated central and peripheral nervous systems for more robust performance.

Inspired by the sinuous lamprey fish, AgnathaX was developed via a collaboration between scientists at Switzerland’s EPFL university, Japan’s Tohoku University, France’s Institut Mines-Télécom Atlantique and Canada’s Université de Sherbrooke. It was designed in order to explore the manner in which animals’ central and peripheral nervous systems contribute to locomotion.

In the past, some scientists postulated that the central nervous system (the brain and spinal cord) was chiefly responsible, as it produced signals that moved an animal’s legs, fins or wings in a rhythmic pattern. Others, however, believed that the peripheral nervous system (nerves that connect the body’s extremities to the brain) played a larger role, as nerves in the moving limbs produced feedback signals that kept the rhythm going.

In fact, both nervous systems are important to locomotion, which AgnathaX has helped to demonstrate.

The articulated robot consists of 10 linked segments, each one of which contains a motor that plays the role of a real lamprey’s muscles. An onboard microprocessor stands in as the central nervous system, by sequentially activating the motors in order to produce an undulating swimming motion. Force sensors located on either side of each segment simulate the peripheral nervous system, by sensing how much the water presses on the segment as it moves. In real lampreys, pressure-sensitive cells in the skin serve the same purpose.

When a motion-tracking system was utilized to analyze the robot’s movements as it swam through a pool, the researchers found that it performed best when both nervous systems worked together. That said, when the scientists cut communication between some of the segments (simulating a spinal cord lesion), the feedback provided by the force sensors was still sufficient to maintain the overall swimming movement pattern. The robot was also able to keep swimming when those sensors were disabled, relying solely on the rhythm generated by its “brain.”

“By drawing on a combination of central and peripheral components, the robot could resist a larger number of neural disruptions and keep swimming at high speeds, as opposed to robots with only one kind of component,” says EPFL’s Dr. Kamilo Melo, co-author of a paper on the study. “We also found that the force sensors in the skin of the robot, along with the physical interactions of the robot’s body and the water, provide useful signals for generating and synchronizing the rhythmic muscle activity necessary for locomotion.”

It is now hoped that the team’s findings could lead to more robust robots – for use in applications such as search and rescue or environmental monitoring – or even improved treatments for human spinal cord injuries.

The paper was recently published in the journal Science Robotics. AgnathaX can be seen in action, in the video below.