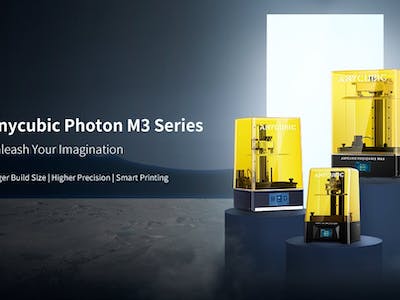 The resin 3D printer market exploded over the last few years, particularly in the consumer segment thanks to the proliferation of affordable LCD panels for MSLA (masked stereolithography) printers. No company has released more printer models in this segment than Anycubic and now they’re back with a brand new model. To help you decide if it is right for you, I put the new Anycubic Photon M3 printer to the test.

Full disclosure: Anycubic provided me with the Photon M3 for this review. But, as always, this review is as honest and unbiased as possible.

The Anycubic Photon M3 is an MSLA resin 3D printer, meaning it uses an LCD panel to mask the UV light that cures the liquid resin. This is the same printing technology behind most resin printers in the consumer market, including most of Anycubic’s other models. The differences between models largely come down to the UV light source and the specifications of the LCD panel.

Sitting squarely in the middle of Anycubic’s catalog, the Photon M3 retails for an attractive $299 on the Anycubic website or $319 through Amazon. Its closest competitor is the ELEGOO Mars 3 ($350 retail), which I will post a review of soon. But the Photon M3 has a larger print volume and a lower price than the Mars 3, which should make it very appealing to buyers.

Before we drive into my impressions of the Anycubic Photon M3, let’s take a look at its basic specifications:

Those specs are all quite impressive, especially at this price point. The build volume may not big as large as the pricier Photon Mono X or Photon Mono X 6K, but it is still generous for this segment of the market. That, along with the high XY resolution, makes the Photon M3 perfect for those looking to print figurines, tabletop minis, and other decorative items.

As is typical for Anycubic printers, the Photon M3 arrived well-packed and secure in a heavy duty cardboard box with foam protection. Inside the box was the printer itself and the standard tool kit, which includes a USB drive, hex keys, scrapers, filters, gloves, and masks. But if you purchase this — or any other resin printer — you will want to purchase gloves and masks in bulk.

After unpacking the printer, setup was straightforward and easy. The only thing you have to do before you can start printing is level the build platform. That’s a quick and easy process which takes less than 3 minutes. After that, you can pour in some resin and start the test print file included on the USB drive.

As has been the case for every other Anycubic printer I have tested, the Photon M3 is well-built and sturdy. Its body is plastic, but the upright extrusion that supports the Z axis linear rail and the bed are aluminum.

There is only a single linear rail on this machine, but it is beefy and more than sufficient for a printer of this size. The bearings on the carriage provide smooth, quiet movement. The ball screw is straight and machined well, meaning the only noise you hear when printing is a little bit of stepper motor whine and the cooling fans.

The Photon M3’s build platform has a laser-etched surface that aids in print adhesion. It is much less aggressive than the square hatch engraving on the Photon Mono X 6K, but that is a good thing in my opinion. Prints adhere well, but then release afterwards without much effort.

The 2.3″ color touchscreen interface is responsive and easy to use. There aren’t many menus to get lost in and it gives you only what you need. The size is more than large enough to show a clear preview of your model before printing and relevant status information during the printing process. As with other Anycubic models, the interface lets you adjust UV power mid-print if you need to do so.

Anycubic produces their own slicing software called Photon Workshop. It is basic, but comparable to the free version of the popular CHITUBOX software. It does not do automatic part orientation, but it does provide most of the other features that you will want, including:

Photon Workshop will be sufficient for most users, but advanced users should be able to use other software as developers add support for the Photon M3. Unlike some printers from other manufacturers, Photon M3 users are not locked into specific software. If you have other software you prefer, then you will be able to use it — assuming its developers implement support.

That said, I stuck to Photon Workshop for all of my tests. It did everything I needed it to do and I didn’t feel the need to use anything else.

For my test prints I used both Anycubic Basic resin (in gray) and Siraya Tech Build resin (also gray). I printed every model at the standard 0.05mm layer height, which is what most users will stick with as it provides a good balance of quality and print time. For settings, I stuck to the standard profile in Photon Workshop and that seemed ideal for both resin types.

I started by printing the lattice cube that Anycubic includes on the USB drive that comes in the tool kit. As one would expect, it turned out great. If you’ve never seen a high-quality resin print, this does a great job of illustrating how smooth the surface finish is and the complete lack of visible layer lines.

From there, I moved on to a handful of other prints, including a development board enclosure, a figurine, and a miniature model of the Eye of Sauron tower.

These all turned out well, with very high detail and smooth surfaces. Using Photon Workshop’s built-in settings, supports held up through the printing process and then came off easily and cleanly. The few minor flaws I was able to see are attributable to model orientation and support settings.

In most reviews, this is the point where I would tell you what I didn’t like about the printer and what I think can be improved. But in this case, I don’t have anything negative to say about the Anycubic Photon M3 and I can’t think of anything I’d change.

This is a very good printer at a competitive price. Anycubic has clearly learned a lot of lessons over the years and they’ve made the most of that knowledge here. If you’re in the market for an MSLA resin 3D printer and don’t need a massive build volume, the Anycubic Photon M3 is a great choice.

Alongside the Photon M3, Anycubic is releasing the Photon M3 Plus and M3 Max. Stay tuned for more details on these models.