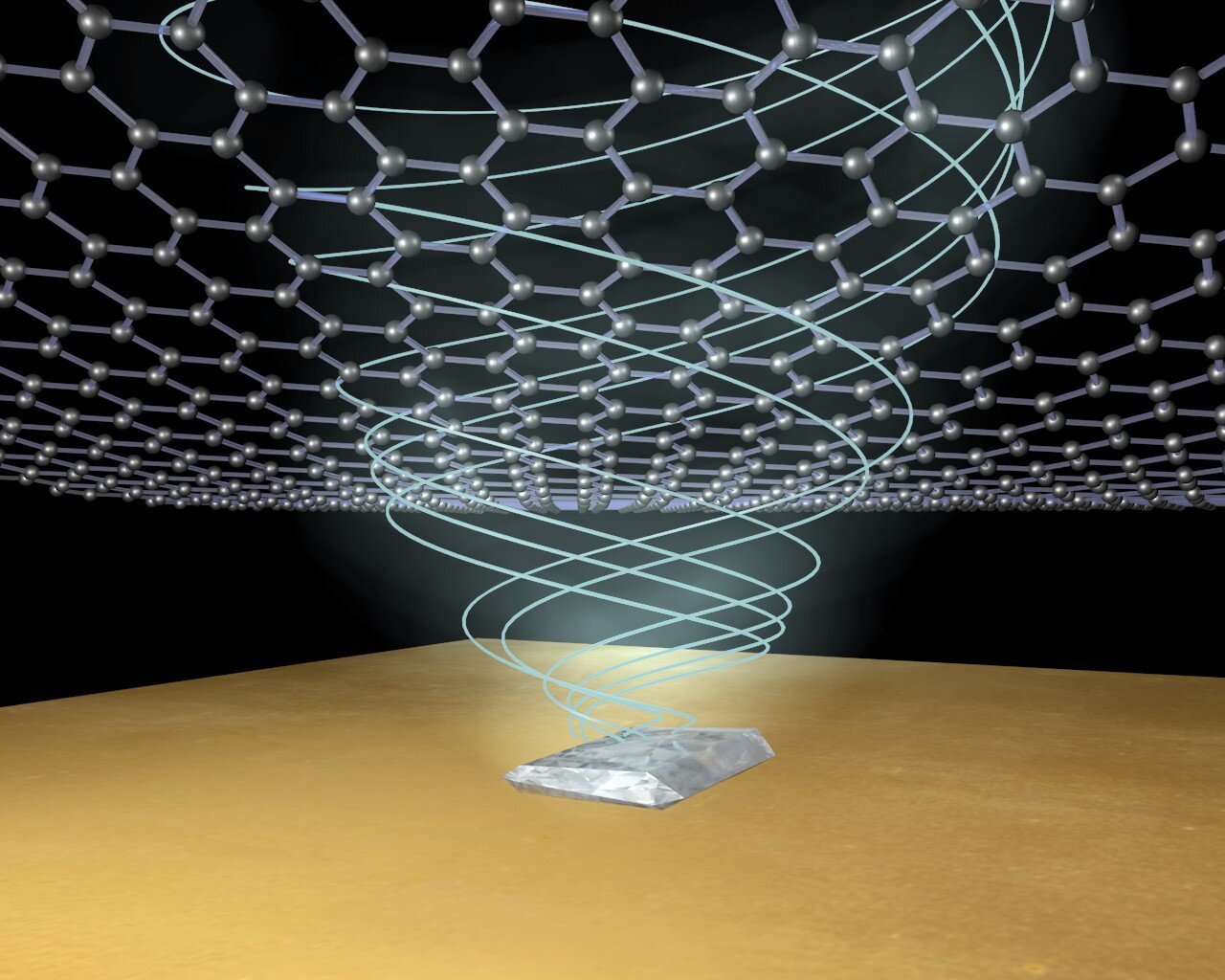 An international team, co-led by researchers at The University of Manchester’s National Graphene Institute (NGI) in the UK and the Penn State College of Engineering in the US, has developed a tunable graphene-based platform that allows for fine control over the interaction between light and matter in the terahertz (THz) spectrum to reveal rare phenomena known as exceptional points. The team published their results today in Science.

The work could advance optoelectronic technologies to better generate, control and sense light and potentially communications, according to the researchers. They demonstrated a way to control THz waves, which exist at frequencies between those of microwaves and infrared waves. The feat could contribute to the development of ‘beyond-5G’ wireless technology for high-speed communication networks.

Light and matter can couple, interacting at different levels: weakly, where they might be correlated but do not change each other’s constituents; or strongly, where their interactions can fundamentally change the system. The ability to control how the coupling shifts from weak to strong and back again has been a major challenge to advancing optoelectronic devices—a challenge researchers have now solved.

“We have demonstrated a new class of optoelectronic devices using concepts of topology—a branch of mathematics studying properties of geometric objects,” said co-corresponding author Coskun Kocabas, professor of 2D device materials at The University of Manchester. “Using exceptional point singularities, we show that topological concepts can be used to engineer optoelectronic devices that enable new ways to manipulate terahertz light.”

Kocabas is also affiliated with the Henry Royce Institute for Advanced Materials, headquartered in Manchester.

Exceptional points are spectral singularities—points at which any two spectral values in an open system coalesce. They are, unsurprisingly, exceptionally sensitive and respond to even the smallest changes to the system, revealing curious yet desirable characteristics, according to co-corresponding author Şahin K. Özdemir, associate professor of engineering science and mechanics at Penn State.

“At an exceptional point, the energy landscape of the system is considerably modified, resulting in reduced dimensionality and skewed topology,” said Özdemir, who is also affiliated with the Materials Research Institute, Penn State. “This, in turn, enhances the system’s response to perturbations, modifies the local density of states leading to the enhancement of spontaneous emission rates and leads to a plethora of phenomena. Control of exceptional points, and the physical processes that occur at them, could lead to applications for better sensors, imaging, lasers and much more.”

The platform the researchers developed consists of a graphene-based tunable THz resonator, with a gold-foil gate electrode forming a bottom reflective mirror. Above it, a graphene layer is book-ended with electrodes, forming a tunable top mirror. A non-volatile ionic liquid electrolyte layer sits between the mirrors, enabling control of the top mirror’s reflectivity by changing the applied voltage. In the middle of the device, between the mirrors, are molecules of alpha lactose, a sugar commonly found in milk.

The system is controlled by two adjusters. One raises the lower mirror to change the length of the cavity—tuning the frequency of resonation to couple the light with the collective vibrational modes of the organic sugar molecules, which serve as a fixed number of oscillators for the system. The other adjuster changes the voltage applied to the top graphene mirror—altering the graphene’s reflective properties to transition the energy loss imbalances to adjust coupling strength. The delicate, fine tuning shifts weakly coupled terahertz light and organic molecules to become strongly coupled and vice versa.

“Exceptional points coincide with the crossover point between the weak and strong coupling regimes of terahertz light with collective molecular vibrations,” Özdemir said.

He noted that these singularity points are typically studied and observed in the coupling of analogous modes or systems, such as two optical modes, electronic modes or acoustic modes.

“This work is one of rare cases where exceptional points are demonstrated to emerge in the coupling of two modes with different physical origins,” Kocabas said. “Due to the topology of the exceptional points, we observed a significant modulation in the magnitude and phase of the terahertz light, which could find applications in next-generation THz communications.”

One such change is the phase modulation, which describes how a wave changes as it propagates and interacts in the THz field. Controlling the phase and amplitude of THz waves is a technological challenge, the researchers said, but their platform demonstrates unprecedented levels of phase modulation. The researchers moved the system through exceptional points, as well as along loops around exceptional points in different directions, and measured how it responded through the changes. Depending on the system’s topology at the point of measurement, phase modulation could range from zero to four magnitudes larger.

“We can electrically steer the device through an exceptional point, which enables electrical control on reflection topology,” said first author M. Said Ergoktas. “Only by controlling the topology of the system electronically could we achieve these huge modulations.”