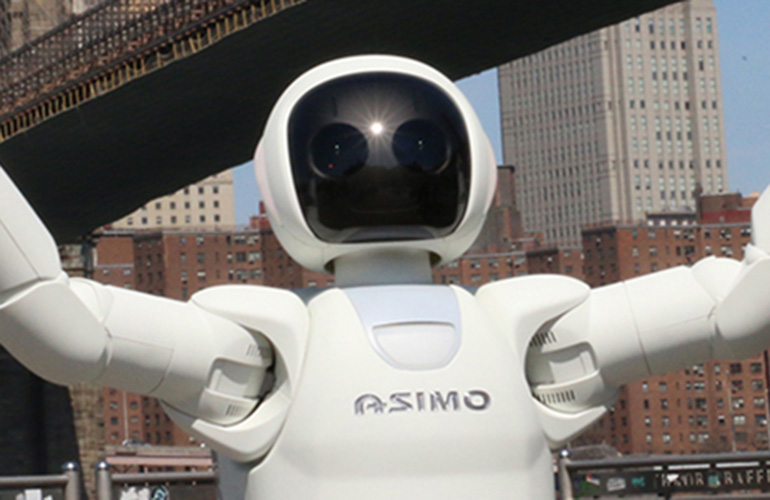 Editor’s Note: This article was updated at 7:45 PM ET with a video of ASIMO’s retirement ceremony.

Honda is retiring ASIMO, its Advanced Step in Innovative Mobility robot, this week. Since its debut in 2000, the child-sized robot has wowed crowds with its abilities to run, hop on one leg, kick a soccer ball, speak sign language with its five-fingered hands and pour coffee.

ASIMO received its last update in 2011, when Honda gave the robot the ability to make autonomous decisions, like avoiding obstacles on its own while it’s walking. In 2018, the company announced it would stop development on the robot. In September 2021, Honda announced plans to develop a new avatar robot that could be virtually controlled from anywhere.

Honda plans to continue sales of Asimo goods. To commemorate ASIMO’s more than 20 years of public appearances, here are some of our favorite moments from the robot.

To celebrate Honda’s 25th anniversary on the New York Stock Exchange, ASIMO rang the bell to open the trading session. At the time, ASIMO’s latest achievements included being able to walk more smoothly down stairways and slopes, and being able to receive voice input.

The same year, Honda leased ASIMO robots to several corporations and museums for use in greeting people at events.

ASIMO made its way to Anaheim, California for the first time in June 2005. The robot found its home at the Honda ASIMO Theater, where it would participate in a live science show as part of Disneyland’s 50th anniversary. The show “Say ‘Hello’ to Honda’s ASIMO” continued until 2015, when the attraction was closed.

In 2017, ASIMO was revealed to be part of Disneyland’s Autopia attraction.

During an event in Japan in 2006, ASIMO made it halfway up a flight of stairs before crumbling. ASIMO has since proved it can handle a staircase, but this early video goes to show how many roadblocks the Honda team ran into while developing the robot.

In 2008, ASIMO conducted the Detroit Symphony Orchestra (DSO) as it opened a concert by conducting “Impossible Dream” for the orchestra. Honda hoped to bring attention to the DSO’s music programs for young people by doing the performance.

Included in the performance was renowned cellist Yo-Yo Ma. After the show, ASIMO demonstrated its abilities for school children in the area. A select group of them were then given the opportunity to receive a music lesson from Ma.

This wasn’t ASIMO’s first or last TV appearance, the robot has also appeared on other notable programs like the Ellen Show in 2006, but this one is particularly fun. Watch as ASIMO serves Stephen Fry water, shows off its newest running skills, dances and even wins some points on the show.

By 2014, ASIMO had come a long way from the robot that rang the NYSE bell. It was able to run and even kick a ball back and forth with former President Barack Obama. During Obama’s visit to Japan in 2014, Obama was greeted in English by the robot at the National Museum of Emerging Science and Innovation in Tokyo.