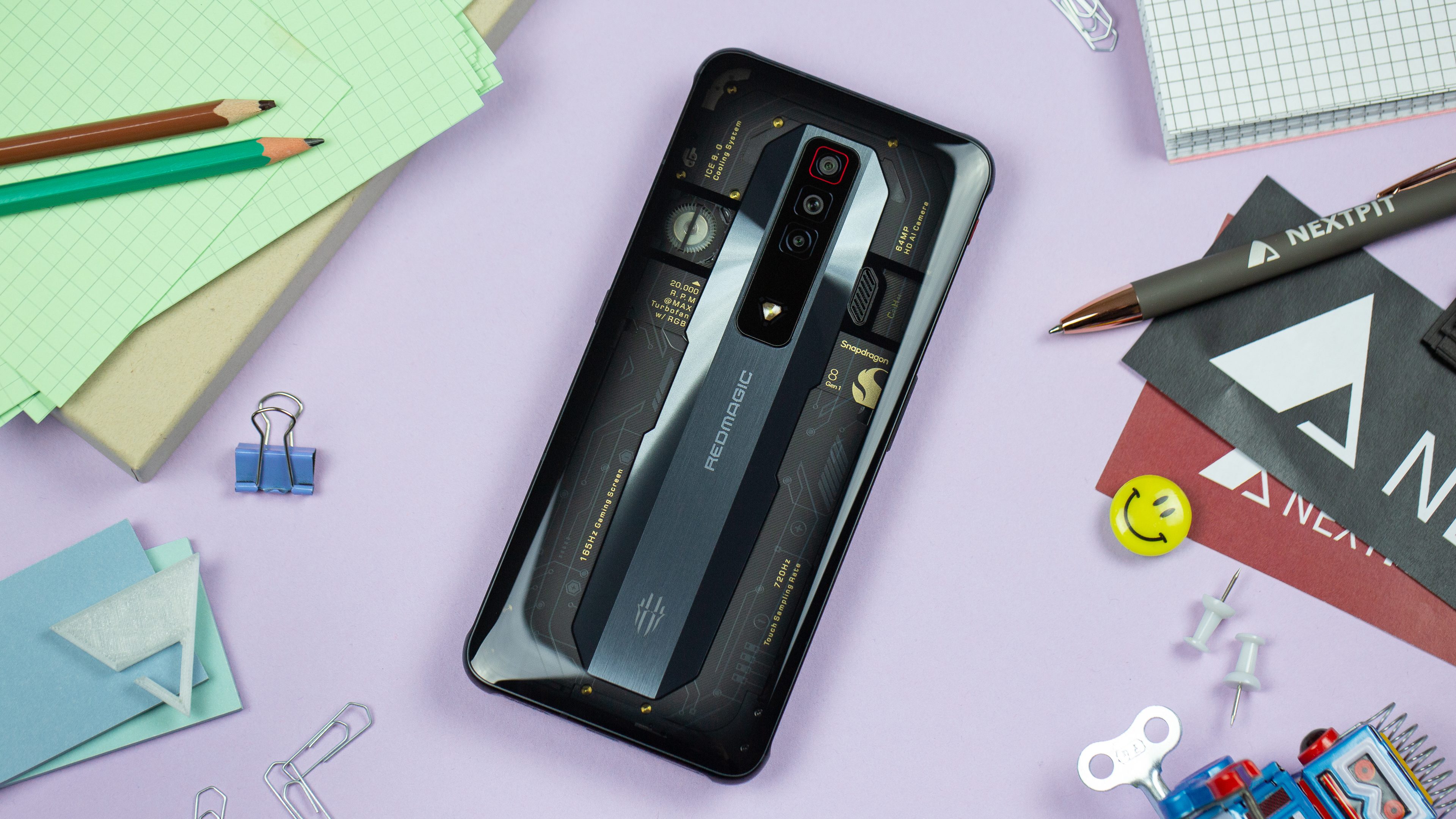 Nubia’s Redmagic 7 is already a strong contender for the best gaming smartphone of 2022. As always with Nubia, the Redmagic 7’s spec sheet is pumped up with the powerful Snapdragon 8 Gen1, a 165 Hz refresh rate display, and, for the first time, an under-display selfie camera.

The Redmagic 7 in brief

The Redmagic 7 really does offer the full package for gamers. With the Qualcomm Snapdragon 8 Gen 1 SoC, 165 Hz OLED display, 720 Hz touch sampling rate, 65 watts fast charging, and hardware specifications that have something for all mobile gaming fans. In addition, there are numerous other features that should optimize your gaming experience: two configurable trigger keys, a powerful cooling system, and the Redmagic OS 5.0 that was specially designed for gaming.

The Redmagic 7 sports a striking design, with a semi-transparent back, RGB LEDs, and other ventilation grills that give it a true miniature gaming PC look.

There’s a lot of talk about the Nothing phone (1) right now, and honestly, I think the Redmagic 7 has potentially taken the wind out of its sails in terms of design. The smartphone comes in 3 colors: Pulsar, Obsidian, and Supernova. It’s the latter that I was able to test and I really liked the transparent coating that reveals the internal fan, among other things. The whole thing reminds me a bit of the dbrand shells, for those of you who know.

Don’t worry, you can turn off all the LEDs to save battery life. As for the rest, there are ventilation grills on each side as well as the famous red switch to switch to the Game Space menu which we will talk about later. The Redmagic 7 also has two haptic triggers located on the top of the case – in landscape mode.

Redmagic indicates a reaction time of 7.4 ms, and the sampling rate is a fast 500 Hz. The idea is to detect commands as quick as possible so that your in-game actions are executed as faithfully as possible. And in use, the haptic feedback of the triggers and their precision is really a plus, especially when you play FPS games.

If you’re playing ranked games on COD Mobile and you start to get sweaty hands, the manufacturer assures that its triggers are protected against sweat. In addition, their sensitivity can be adjusted in the “Redmagic Game Space” – but we’ll get to that later.

The screen is among the most important features of any gaming smartphone – and that’s why Nubia puts a lot of effort into it. The 6.8-inch AMOLED display has a 20:9 aspect ratio and its resolution is FullHD+, which is 2400 x 1080 pixels.

The size-to-screen ratio is 91.28% although the smartphone has a fairly wide chin and forehead. But at least the screen is not obstructed by a punch or other notch. The dynamic refresh rate of the Redmagic 7’s screen can go up to 165 Hz. That’s almost too much for most mobile games, but you can never have enough frames.

The screen’s maximum brightness, at 700 nits, is a bit on the low side, however. If you want to play in direct sunlight, it’s best to find a shady spot. Personally, I always found it readable under any circumstances. The touch sampling rate is also worth mentioning as the Redmagic 7 offers 720 Hz here. This should allow the smartphone to recognize inputs on the touchscreen with as little delay as possible – so if you lose, it’s not the phone’s fault!

I was surprised by the number of display modes – normal, natural, vivid, P3 spectrum, sRGB spectrum – and the ability to customize each mode according to your preferences. The Game Space menu even offers an extra layer of customization with display presets depending on the type of games you play.

The Redmagic 7 runs on the Redmagic OS 5.0 overlay based on Android 12. The Android interface offers all sorts of special features for gamers, including Game Space. The menu gives you countless options to adapt the smartphone to your gaming habits.

You can access this menu either by activating the red switch in the upper right corner of the smartphone, or directly from your game by swiping to the right. Basically, this is your control center for customizing your gaming experience. You can adjust the screen refresh rate and touch sampling, CPU and GPU resource allocation, internal fan speed etc…

But Game Space also offers more niche features to enhance your user experience with several “plug-ins” such as displaying a permanent viewfinder when playing an FPS or the ability to zoom in on the part of the screen you are aiming at in the game. It’s hard to visualize, but these are very useful tricks in multiplayer and could almost be considered as cheating as it gives you an advantage.

Nubia also offers a note tool for taking and editing notes on the fly during a game, handy for complex or puzzle games that sometimes require you to make cheat sheets. There’s also a stopwatch function that you can activate to record your speed run record (does that exist on a cell phone?) and a reminder system so you don’t miss a raid or an online tournament, for example.

Redmagic OS 5.0 also allows you to record your games and create clips of your best moments that you can find in the Game Space very easily. The interface also offers other gadgets such as measuring your heart rate via the fingerprint sensor or a whole bunch of statistics about your game sessions that are then displayed as widgets on your home screen.

The Redmagic 7 was one of the first smartphones equipped with Qualcomm’s new Snapdragon 8 Gen 1. The SoC has a high-performance core of 3.0 GHz, three powerful cores of 2.5 GHz, and four “small” cores of 1.8 GHz each. In addition, there is a choice of 12, 16, or even 18 GB of LPDDR5 RAM, plus 6 GB of virtual RAM (a portion of the storage allocated to RAM).

To ensure that the SoC does not overheat, Redmagic has installed a sophisticated cooling system called ICE 8.0. In addition to all sorts of sophisticated heat pipes, there is a powerful fan here that should reduce the temperature by a total of 16°C. Despite a maximum speed of 20,000 RPM, the motor is supposed to be quiet, at just 28 decibels.

And for the record, the fan is a bit noisy but it does a great job. It’s simple, the Redmagic 7 is the most efficient smartphone I’ve tested so far when it comes to temperature control. Whether in real-life conditions, on CoD Mobile, Genshin Impact with graphics at max, or on the 3DMark Wild Life Stress Test benchmark, the smartphone never overheated.

No overheating means no thermal throttling, which allows the Redmagic 7 to offer consistently high framerates. On average, I was running at least 60 FPS without any drop on most of the games (which offered 60 FPS or more). On Dead Cells, I was quietly running at 120 FPS without a single drop.

In addition to the Qualcomm SoC, Redmagic also integrates its own gaming chip called “Red Core 1”. This one takes care of special functionality, including the control of the triggers and the vibration engine. According to the manufacturer, the Red Core 1 also improves the brightness of games and the quality of sound effects.

The previous Redmagic smartphones were clearly not photo smartphones – and it’s a bit the same for the Redmagic 7. So we find a triple photo module at the back with a 64 MP main lens, an 8 MP ultra-wide-angle, and a 2 MP bokeh camera which, let’s face it, is likely to be very anecdotal.

Overall, I found the photos quite flat, the smoothing being too aggressive, which makes the shots lose their sharpness. The colorimetry was also rather disappointing as I found the colors far too dull. The digital zoom operated by the main wide-angle lens was usable at 2x magnification. But the artifacts are too present as soon as you go beyond that (10x being the maximum).

The portrait photos looked quite clean and it is surely partly due to the dedicated bokeh camera. At night, the smartphone does not do well, but the dedicated night mode often allows you to make up for it by improving the sharpness and by managing the light sources better for a more harmonious exposure.

In the video department, the Redmagic is capable of recording in 4K and 1080p at 60 FPS with the rear camera module. We can go up to 8K (30 FPS) but, without stabilization, the rendering is more than questionable in terms of relevance. Stabilization in other video modes looks pretty good, though.

Video with the Redmagic 7 in 8K

The Redmagic 7’s battery has a capacity of 4,500 mAh and accepts wired fast charging with 120 watts of power. With the maximum charging power, it takes only 17 minutes to charge the smartphone from zero to 100, according to the manufacturer. But that’s for China only. In North America and Europe, you have to make do with 65 watts.

I’ll have to put the smartphone through my PCMark benchmark, but in use, I found the battery life to be a step down from last year’s model (which had a larger 5050 mAh battery). With the refresh rate at 90 Hz, all LEDs turned off and the performance level set to “balanced”, I think you can easily last more than a day.

But after half an hour of CoD Mobile with the performance level at max, the screen set to 165 Hz, and the fan on, I could see my battery draining fast which is not reassuring. Especially since the Redmagic 7 doesn’t offer a USB-C port on the left side, which would have made it easier to recharge when held in landscape mode to play.

The Redmagic 7 perfectly fulfills its role as a gaming smartphone in my opinion. It’s up to you to decide if this is the most relevant use for you. If you see your smartphone primarily as a gaming device, then it’s hard to find a more powerful and efficient Android model than the Redmagic 7.

Someone who plays semi-serious multiplayer games, ports of PC/console games to mobile, or any other game that requires a bit more immersion will be much more receptive to the gaming traits of the Redmagic 7. If you don’t identify with this typical user profile, the smartphone is immediately less recommendable.

The software experience is not the most accomplished, especially when you leave the Game Space and strictly gaming features. The manufacturer’s update policy is not the clearest either. And the performance of the camera module is not really something to dream about.

But personally, I find the Nubia Redmagic 7 quite interesting. They really seem to bet on this gaming niche and, instead of trying to find an impossible balance and propose a utopian smartphone just a hair more powerful than the others, the manufacturer apparently really knows the use they want to target with the phone to make it a real gaming hub.