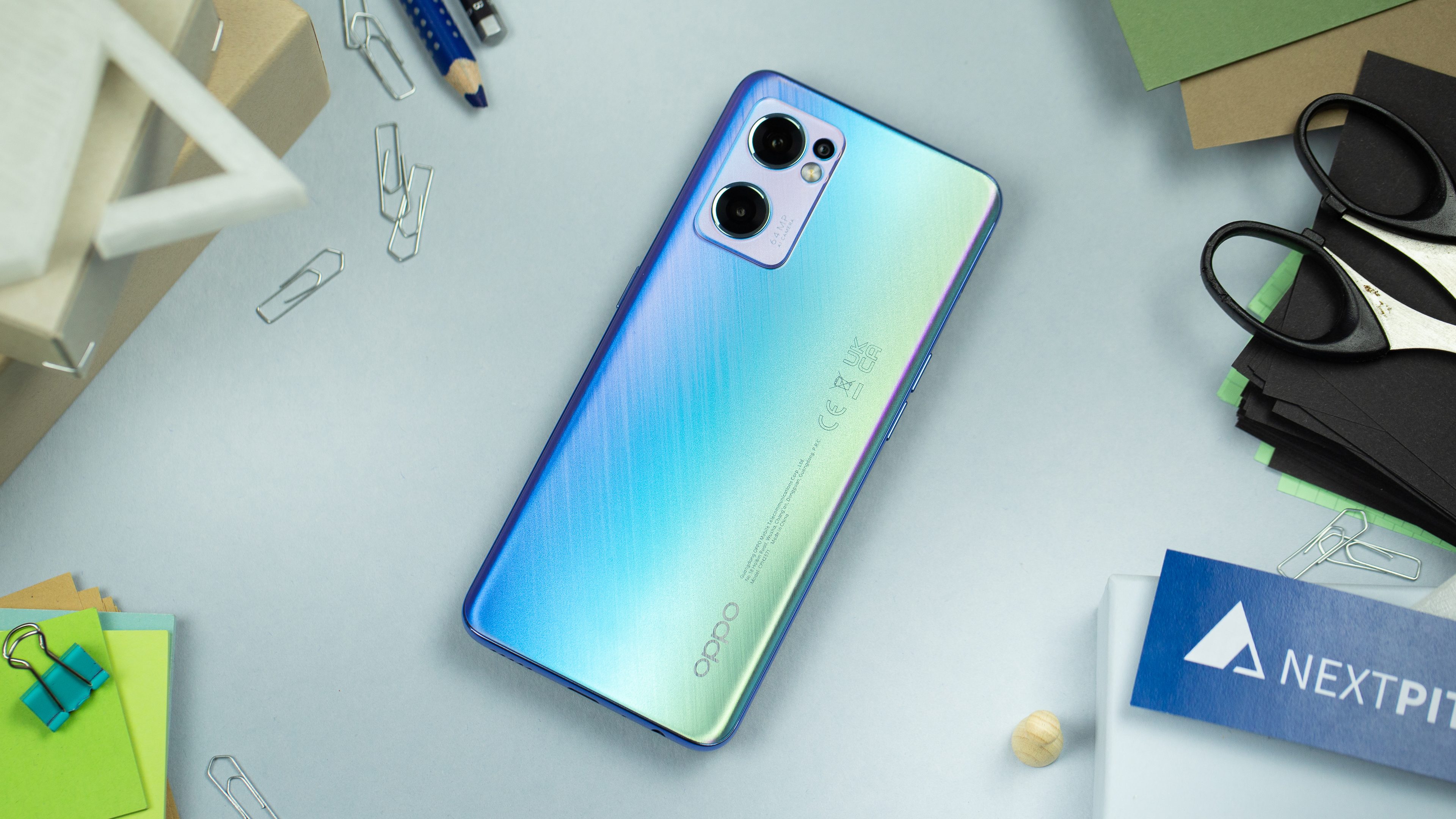 The Oppo Find X5 Lite carries lots of responsibilities because of its name but don’t be fooled, it is above all an intermediate smartphone and a very good one at that. In this Find X5 Lite review I show you why this phone can be an interesting option in the mid-range Android market.

Despite its flagship pedigree, the Find X5 Lite is a true mid-range phone. Outside the ColorOS confines, the phone is identified as the “Reno7 5G” in Google Play Services, benchmarks, and more, which sets a realistic expectation when using the smartphone.

With a price tag of around €500 (around $550 after conversion), the Find X5 Lite competes directly with the Samsung Galaxy A53, and brings to the fight features such as a good memory configuration by default (8+256 GB), a smooth 6.43” OLED display, a reasonably fast 5G processor, and the 65W SuperVOOC charger included in the box.

It is worth noting that the Find X5 Lite is not officially sold in North America, but the device can be bought via independent import.

When compared to the other models in the Find X5 range, it is clear that the Lite model does not follow the same design language, betraying its origin as a mid-range Oppo Reno model. But that is not a bad thing, as the Reno7 5G
Find X5 Lite offers a good build quality with a more traditional back design.

The front is dominated by the 6.43-inch AMOLED screen which is “good enough”: it offers good levels of brightness, refresh rate, and resolution, not really aiming for best-of-class specs, but still a good compromise between features, price, and battery life. If you are really looking to criticize the display, you could point out the slightly larger than usual lower bezel, but in practice that helps in usability making the bottom part of the screen easier to reach, at least for my average-sized hands.

In the back, the Find X5 Lite adopts a traditional camera bump, not going for the unconventional design used in the more expensive models. The tested unit uses an attractive gradient finish in the plastic material, which was not covered by fingerprints after use.

The build quality is good, with a thin profile that doesn’t feel cheap and, at the same time, the weight is lighter than it looks at 173 grams (6.1 oz). The buttons are placed within reach and the haptic feedback, in general, was good.

The Oppo Find X5 Lite offers more than enough performance for daily tasks
. With the MediaTek Dimensity 900 SoC and 8 GB of RAM, plus 256 GB of storage capacity plus a microSD card slot, the phone seems capable enough to still be usable two or three years for now, unless something very wrong happens with the software side.

Speaking of the software, the first impression after turning the Find X5 Lite on is the amount of bloatware. Amazon Music, Amazon Shopping, Booking, Facebook, LinkedIn, Netflix, Prime Video, and PUBG were either installed or had a shortcut in the app drawer. Most of these apps are admittedly must-haves, but it doesn’t serve as a good first impression.

Another nitpick is that it seems every single ColorOS app asks you to agree with the terms of service (ToS) during the first use, which can be quite annoying in the beginning and could be solved by a system-wide ToS.

With that aside, performance in games was good, with stable frame rates and no signs of thermal throttling, as long as you use the games’ recommended settings – don’t expect to play with Ultra settings. The pre-installed PUBG ran fine, and even not being advertised as a gaming phone, ColorOS on the X5 Lite offers a comprehensive game overlay with the usual options for no notifications, screen recording, and a FPS/GPU/CPU usage display.

Performance in benchmarks was so stable it was almost boring, with nothing really noteworthy to report. The Find X5 Lite performed similarly to its predecessor Reno 6 5G, which was expected since both share mostly the same specifications.

And that is probably the weakest point in the Find X5 Lite. The similarly-specced Reno6 5G is already 33% cheaper, and if your priorities are with mobile gaming, Snapdragon 778G devices offer better performance and can be found for less as well.

A camera that lacks versatility

If you read the Reno 6 5G review, you probably already know what to expect from the Find X5 Lite, because both smartphones share the overall specifications for the camera sensors and lenses.

Honestly speaking, weather conditions didn’t help much during the review, even so,
the pictures from the main camera with 64 megapixels – pixel-binned 4-to-1 to a 16 MP file – were quite good,
with pleasing colors and without oversaturating the image like some brands usually do.

The 8-megapixel ultrawide camera, on the other hand, returned pictures that were OK at best, with less vivid colors than the main camera, resulting in a pale or dull image.

As for the macro lens, it is quite a challenge to take a usable picture with it, and even your best shots get questionable utility with the 2-megapixel resolution, which is simply not enough to capture details up close.

Night Mode didn’t perform as well for me on the Find X5 Lite as it did for Ben in his Reno 6 review – might have been the very windy night I had to take the shots – but the results were merely ok, with the option boosting brightness overall while losing a bit of contrast. On the ultra-wide-angle camera, however, night mode didn’t really improve things, with the same results as the Reno 6.

The selfie camera performed well in indoor shots, without overly processing the image – or applying excessive filters by default. Curiously though, outdoor pictures ended up with a circular halo despite trying different angles.

In the end, the camera results for the Find X5 Lite are far from the ones found in the Pro and vanilla models, betraying its mid-range origins, and even there, the competitors are already one step ahead, with either more versatile lenses or higher resolution sensors.

Oppo includes its SuperVOOC 65-watts charger with the Oppo Find X5 Lite and the results are excellent as usual.
The phone charges quickly with no signs of overheating and battery life was enough for two days of medium usage
.

The battery capacity in the Find X5 Lite is a decent 4.500 mAh, which is slightly bigger than the 4.300 mAh found in the Reno6 5G, without compromising on weight or dimensions. In the PCMark battery test, the app crashed close to the end of the benchmark, after more than 12 hours of running continuously.

As for the SuperVOOC charger, it performed slightly worse than in the Reno6 review but was still among the best results we have seen in this category. It is worth noting that the adapter is big and built in a way that may block power outlets around it. One last point is that the Find X5 Lite doesn’t offer wireless charging, but the feature is still rather rare in the mid-range market.

Technical specifications and other information

I will list below other points that may interest the NextPit community, but are not worth additional paragraphs:

Conclusion: Not quite Find X

The Oppo Find X5 Lite has more in common with the Reno6 5G than with the other Find X5 models, and the reason is simple, the phone was born as the Reno7 5G and it showed throughout this review. And most of the points my colleague Ben Lucks raised in his Reno6 review still apply to the X5 Lite.

And that’s even worse for a device that costs the same as its predecessor’s original MSRP, and whose price dropped already 33%. To make matters worse, you can find competitive options in the same $300 price range the Reno6 is currently at, like the Galaxy A52s, which promises security patches for longer, offers better performance, and a slightly more versatile camera. And if you are reading this in Europe, you are spoiled for choice…

Not that the X5 Lite is a bad smartphone, mind you, but it seems that the “Find X5” branding made the Reno7 5G more expensive than it should be, and that is a shame for such a promising phone.