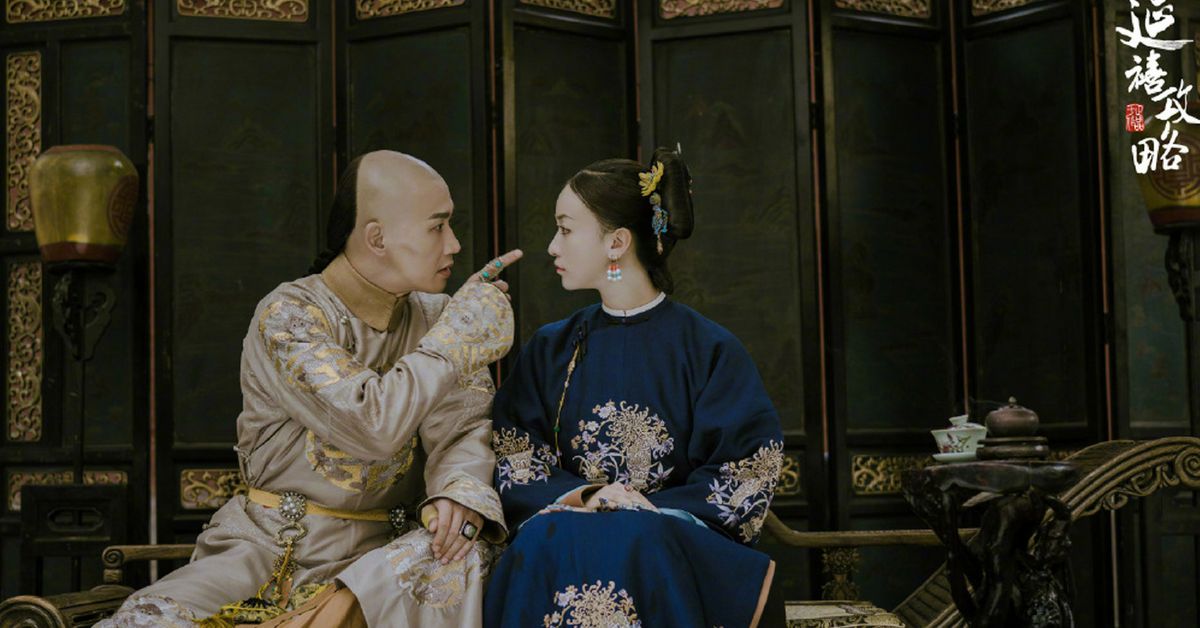 It takes only a few minutes into Story of Yanxi Palace, the smash hit 2018 Chinese historical palace drama, for the training wheels to fly off.

Alongside our heroine, Wei Yingluo (Wu Jinyan), the audience is dropped into the middle of a complicated society with clandestine rules and labyrinthine social codes: the Forbidden City. Governed by the real-life Qing Dynasty Emperor Qianlong, and built around the stratagems and maneuvers of his many concubines, the 18th-century city oozes opulence and ornate luxury — but also teems with duplicity and danger.

Unlike the audience, however, Wei Yingluo has come prepared.

The story opens with a group of lowly embroidery maids, all new to the palace, encountering a group of eligible noblewomen on their way to meet the emperor. After one of the noblewomen bullies them, Wei Yingluo, a new maid, steps in and smooths things over. Yingluo assuages the noble lady’s anger by showing her a unique trick that makes her footsteps trail roses — thus sending her on her way to meet the emperor with a special advantage over the other would-be consorts.

So far, so good: Our hero is a modest, discerning girl who knows how to flatter to keep the peace.

The moment the emperor (Yuan Nie) sees the roses the girl has trailed behind her, he realizes she has disobeyed the imperial Manchu decree against footbinding — a huge offense. He instantly disgraces her and her entire clan.

This, we realize, is what happens when someone crosses Wei Yingluo: a devious, subtle form of sabotage that depends upon the perpetrator’s own mistakes to damn them in the end.

Just like that, we’re off to the races. Over the course of 70 episodes, our lowly palace maid faces an endless onslaught of power plays and manipulations, all amid a steady, unprecedented social climb through the ranks of the court. While watching, I kept being reminded of The Queen’s Gambit, a show where the story’s chief appeal is the satisfaction of getting to watch a capable woman being capable, while all the men in her life either support her, get out of the way, or live to rue their mistake in trying to possess her.

Rest assured, Yanxi Palace also has all the betrayal, backstabbing, murder, epic love sagas, and tragedy any fan of other grittier genres and shows, like Game of Thrones or hit Chinese xianxia drama The Untamed, could want. Granted, palace dramas like this one typically have plenty of grim tropes, but I was unprepared for how much violence and bloodshed accompanied a clear focus on women’s storylines. Memorable performances from its giant ensemble cast seal the deal — especially Wu Jinyan as Wei Yingluo, a heroine among heroines. Cunning, reckless, stubborn, but also kind, a little goofy, and a little insecure, she never relinquishes her control over her own life, no matter how much life in the Forbidden City dictates female subservience.

Loosely based on a real historical figure (to tell you who would be a spoiler, but if you must know, here’s a hint), Yingluo quickly becomes a palace troublemaker: An unruly, outspoken rule-breaker who narrowly avoids certain disgrace by being three steps ahead of everyone around her. Yingluo’s only weapons may be etiquette and embroidery, but she wields them with such skill that she quickly becomes a threat to the palace’s intricate social hierarchy — and a thorn in the side of the emperor himself.

Yingluo’s deliberate social climbing isn’t because of ambition, however; her real goal is to find the person who murdered her sister, a palace maiden who was expelled in disgrace after a murky scandal, only to end up strangled shortly after. Convinced her death was no suicide, Yingluo enters the Forbidden City working as a maid in order to seek the perpetrator. What she finds is a palace full of tripwires and subterfuge, with concubines jockeying for power, willing to do whatever they can to gain the emperor’s favor, including resorting to sabotage, betrayal, and even murder. Within such a power structure, true friendship among women is the hardest-won prize of all — but it also might be Wei Yingluo’s ultimate secret power.

So far this might sound like a typical palace drama, full of shallow scheming and social class structure at play. But even for longtime fans of Chinese historicals, Yanxi Palace stands out for its puzzle-box plotting, infinitely bingeable pacing — 70 episodes might sound like a slog, but there are points where it’s nearly impossible to stop watching — and addictive characterizations. We watch Yingluo level up, shounen anime protagonist style, as she bests opponent after opponent, relying on a combination of practical skill and psychological strategy. Alongside these maneuvers, she has to learn to navigate a series of romantic entanglements: to strike a delicate balance between the affection she has for the young palace guard Fuca (Xu Kai), her friendship with the conniving eunuch, Yuan (Wang Maolei), and her numerous charged clashes with the emperor.

Yanxi Palace’s showrunner is the veteran palace drama screenwriter Yu Zheng, putting a loudly feminist spin on tropes he knows well. The palace concubines fight for agency and autonomy in an oppressively patriarchal society. The show also fixates on the relationship between power and influence. Yingluo’s enemies constantly weaponize virtuous concepts in order to manipulate perceptions of truth and use them to ruin lives. The more powerful they are, the harder the “real” truth is to uncover.

Legendary Hong Kong actress Charmaine Sheh is particularly memorable as Consort Xian, a concubine with a legit villain origin story born out of her realization that the meekness, decorum, and gentleness she’s performed all her life have only left her weak and powerless. Consort Xian consigns herself to trust no one, while Wei Yingluo is driven by loyalty to the trusted women in her life. Their separate strategies evolve over the entire series before finally coming into direct conflict, and the payoff is epic.

Very little is known about the life of Wei Yingluo’s historical counterpart or most of the show’s other historical analogs; outside of some key background details, the plot is entirely fictional. (Another palace drama that followed Yanxi Palace, Ruyi Zhuan, presents Charmaine Sheh’s historical figure as the heroine.) But Yanxi Palace also serves up an authentic slice of Chinese history, thanks to its exquisite production design.

The series landed in the middle of a huge craze for historical palace dramas (many of which are on Netflix, if you get a yen for more), and it had a huge budget, reportedly around $45 million. Luckily for us, most of it seems to have gone into the production design, and the faithful, painstaking recreation of cultural and historical details. If you’re a fan of historical dramas but have been disappointed by the gaudy insubstantial feel of shows like The Gilded Age or Bridgerton, the sheer physicality of Yanxi Palace’s production details might make a refreshing change. The show is full of intangible cultural heritage crafts, some of which the concubines and their maids practice, like rare embroidery and jewelry techniques. The costuming and accessories are often relics of real Qing Dynasty palace garments, which the show hired real Forbidden City relic recreation specialists to make. Individual dresses had exorbitant price tags, and a single crown worn by one consort reportedly cost nearly $150,000.

The investment paid off in a huge way. Yanxi Palace immediately won rave reviews from the public, critics, and cultural experts for its restorative care. Once the show had the public’s attention, the plot carried them away: The show became the most-Googled show of 2018, despite Google being banned in China. It also boosted museum attendance in China along with Forbidden City tourism.

And, in what is undoubtedly the biggest mark of its cultural impact, its enormous success caused the Chinese Communist Party to harangue that palace dramas had a “negative impact.” Thankfully, it seems as though few audience members agree.

The Story of Yanxi Palace is available for free on YouTube, for free on Viki, and for free on iQiyi and the iQiyi app. I recommend watching on Viki, where the English subtitles feature translators’ notes for additional context. While the main series is not on Netflix, a short sequel featuring several returning cast members, including Wu Jinyan, is exclusively on Netflix. Yanxi Palace: Princess Adventures follows Yingluo’s daughter as she navigates a palace that — largely thanks to her mom — is a little kinder to all the women within it.

For more recommendations from the world of culture, check out the One Good Thing archives.