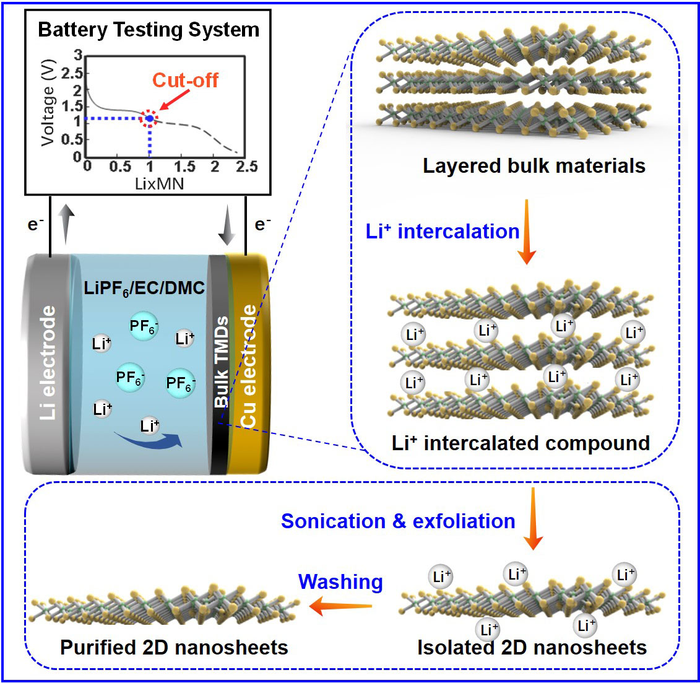 An upcoming group of materials known as two-dimensional (2D) transition metal dichalcogenides (TMDs) that can be employed as insulators and semiconductors have favorable potential in numerous applications because of their exceptional properties.

However, the consistent manufacture of these atomically thin 2D materials has been difficult. A research group headed by a material scientist from the City University of Hong Kong (CityU) has formulated an effective electrochemical exfoliation technique to accomplish the high-yield manufacture of TMD nanosheets.

This novel technique paves the path toward mass manufacture of TMD nanosheets for a number of applications in the future.

The research group was directed by Dr. Zeng Zhiyuan, Assistant Professor in CityU’s Department of Materials Science and Engineering (MSE), in partnership with researchers from the University of Montpellier and Ulsan National Institute of Science and Technology (UNIST).

Their findings have been reported in the academic journal Nature Protocols.

A Simple Method That Offers a Higher Degree of Control

Earlier, TMD nanosheets can be manufactured using a chemical technique known as lithium-ion intercalation-based exfoliation. Intercalation can be defined as the insertion of an ion or molecule into materials that comprise layered structures.

However, this conventional chemical technique has to be performed at a comparatively high temperature of up to 100 °C and for a prolonged time, some may require 3 days. More notably, it is hard to regulate the quantity of lithium insertion.

To solve the abovementioned challenges, Dr. Zeng and his group made use of an electrochemical method to synthesize the mono- or few-layer inorganic nanosheets.

The method we developed is relatively simple and straightforward, and it offers a higher degree of control under mild conditions. Using our method, high-yield preparation of monolayer TMD nanosheets can be easily conducted at room temperature of about 25 ℃ within 26 hours.

Dr. Zeng highlighted that using their technique, the quantity of lithium intercalation can be regulated effectively by tweaking the cutoff voltage.

This superior feature can make the lithium intercalation process stop at an appropriate lithium amount.

Dr. Zeng emphasized the four benefits of this electrochemical method. Firstly, high production of monolayer TMD is realized. Taking TaS2 and MoS2, two types of TMDs that they examined, as examples, among the 2D nanosheets prepared with this technique, more than 90% of them (92% for MoS2 and 93% for TaS2) were single layer, while the remaining 8% and 7% were trilayers, double layers or even multi-layers.

Secondly, they were able to make monolayer TMD nanosheets in a large lateral size. The lateral size of the MoS2 monolayer the researchers achieved via this preparation technique can reach up to 3 μm.

Thirdly, their process is scalable. The researchers believe that additional scale-up of manufacture of monolayer TMD nanosheets for industry applications can be attained by boosting the bulk TMD quantity from milligrams (mg) to grams (g), or even tons.

Lastly, their TMD nanosheets are printable and solution-processable. They could be extensively and uniformly dispersed in an aqueous solution without incorporating a surfactant and could be employed as ink in printing technology.

“Our method is a mature, efficient, and promising strategy for the high-yield production of mono- or few-layer TMD nanosheets,” stated Dr. Zeng, who has explored the mass manufacture of 2D TMD materials for more than 10 years.

The researchers stated that their technique for high-yield and mass manufacture of mono- or few-layer TMD nanosheets would pave the way for a new course for basic and applied research, garnering the attention of academia as well as industry.

The TMD nanosheets prepared by this method could be widely applied in various fields such as gas-sensing, memory devices, detection of biomolecules, electrocatalytic hydrogen evolution, light‐emitting diodes, and lithium-ion battery.

The corresponding authors of the study are Dr. Zeng and Dr. Damien Voiry from the University of Montpellier, and Professor Hyeon Suk Shin from the Ulsan National Institute of Science and Technology.

The study was funded by CityU, the Shenzhen Science and Technology Innovation Commission, the Research Grants Council of Hong Kong, and the National Research Foundation of Korea.