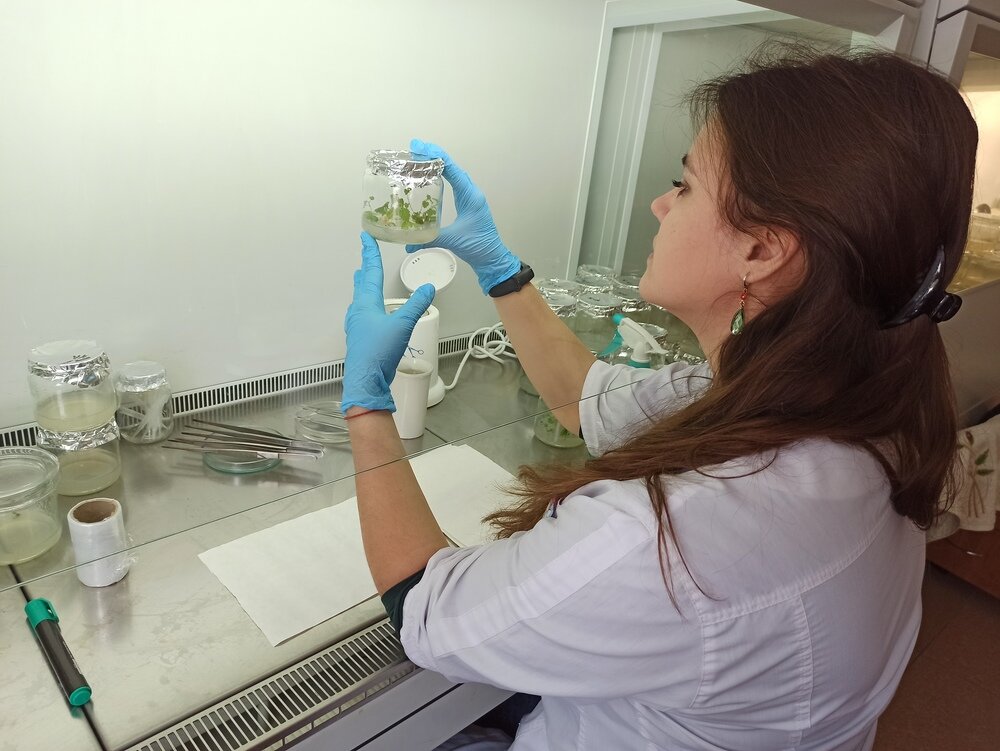 A simple and effective preparation for the protection of in vitro-derived seedlings from phytopathogens has been developed by a scientific team of NUST MISIS together with colleagues from Voronezh and Tambov. Small doses of copper oxide nanoparticles in its composition work as an immunostimulator of plants. As a result, scientists are planning to obtain a preparation that will increase the amount of harvested planting material. The results of the work have been published in the Nanomaterials international scientific journal.

Modern methods of mass phytoproduction include obtaining planting material of woody plants by clonal micropropagation in vitro. This method of vegetative propagation makes it possible to obtain new plants, genetically identical to the original specimen, in a laboratory vessel or other controlled experimental environment rather than within a living organism or natural setting.

There are some challenges with the new technology: as nutrient media for phytoclones provide ideal conditions for microbial growth, new plants need to be created and maintained in complete sterility. Antibiotics are increasingly being used to reduce the risk of contamination in plants propagated in vitro.

However, along with the bactericidal effect, antibiotics can also have a toxic effect on plant tissues, inhibit their growth and development. In addition, microorganisms can adapt to biocidal drugs by mutations, which leads to the resistance of phytopathogens. According to Russian scientists, the use of nanoparticles as sterilizing agents could be a safe alternative to antibiotics.

The research team of scientists from NUST MISIS, Voronezh State University of Forestry and Technologies named after G.F. Morozov and Tambov State University named after G. R. Derzhavin aimed to assess the effects of copper oxide nanoparticles on the growth of colonies of spore-forming mold fungi, as well as on the production of stress resistance genes in birch clones in vitro when infected with phytopathogens.

“As we expected, copper oxide nanoparticles had a pronounced antifungal effect on phytopathogens in plant culture, which is consistent with the results of a number of previous studies. As possible mechanisms of this phenomenon, we assume both the diffusion of copper ions, which is an antimicrobial agent, and specific nanotoxic effects, such as the induction of oxidative stress or damage to the cell membrane,” said Olga Zakharova, an expert from the Department of Functional Nanosystems and High-Temperature Materials at NUST MISIS.

Interestingly, according to the developers, the maximum sterility of plants was observed at the lowest concentration of nanoparticles studied. Scientists suggest that the effect is achieved not through the direct destruction of phytopathogenic microorganisms by nanoparticles, but indirectly through the stimulation of immunity of seedlings.

“Nanoparticles in low concentrations can cause moderate stress in plants, one of the reactions to which is a change in their biochemical status. Compounds such as peroxidases and polyphenols, which are part of the system of non-specific protection of plants against phytopathogenic microorganisms, are beginning to be produced. At the same time, an increase in the concentration of nanoparticles increases the ‘nano’ induced stress, and the overall efficiency of plant adaptation to stress begins to decrease, which is ultimately manifested by a reduced number of viable microclones at the maximum concentration of nanoparticles,” Olga Zakharova added.

According to the researchers, the obtained data confirm the prospect of using copper oxide nanoparticles to optimize the technology of plant cultivation in vitro. The next stage of the project is to accurately identify the mechanisms by which nanoparticles affect plants and phytopathogens.

Reducing pesticide use with nanoparticles