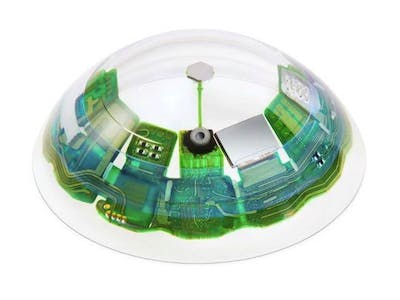 Designed to provide what its creators call “invisible computing,” the Mojo Lens is a wearable computing system contained entirely within a contact lens — providing augmented reality capabilities, Mojo Vision claims, without the bulk. It’s been in development for six years, but seems closer than ever to reality courtesy of a newly-developed prototype.

“This Mojo Lens prototype is a huge step forward,” claims company co-founder and chief technology officer Mike Weimer of the new lens design. “We have advanced hardware innovations in the areas of display, communications, power, and eye-tracking. With these critical features coming together, Mojo now has a lens to further develop, test, and iterate new Invisible Computing experiences that will bring new benefits to people for both everyday and mission-critical needs.”

The latest prototype includes, the company claims, the world’s smallest and highest-density display offering 14,000 pixels per inch (PPI) in a 0.5mm diameter, a novel low-latency protocol for video streaming via a 5GHz radio module and Arm Cortex-M0 processor, ultra-precise eye tracking via an inertial measurement unit, a medical-grade power system, which opens the path to clinical trials, and an eye-controlled user interface that allows for features to be triggered at a glance.

Mojo Vision showcased its last-generation hardware back at the Consumer Electronics Show 2020, claiming it was hoping to launch the devices commercially within three years. Its latest unveiling comes with no promises that you’ll be able to pick a pair off the shelf by the end of 2023, however — but the company has confirmed it is to begin working with “select partners” for user testing. It has already confirmed “strategic partnerships” with Adidas Running and 18Birdies for sports applications.

What’s missing between the 2020 prototype and its 2020 equivalent, however: An image sensor, which was previously a key feature of the platform — allowing for vision correction, zooming, recording, and even machine learning-based live image enhancement. The new prototype — and, by extension, the company’s first commercial product — will no longer include that functionality, and will instead link to an external smartphone camera for a subset.

IEEE Spectrum’s Tekla S. Perry was able to try out the prototype Mojo Lens — holding it near to, rather than inserting it on top of, her eye for the purposes of the demonstration — and details a range of applications including a compass, travel tools, fitness tracking, teleprompting, and a monochrome video stream.

More information on the new prototype is available on the Mojo Vision website; no launch date has yet been announced.