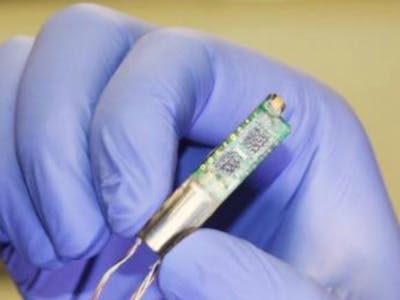 Much has been learned about animal behavior and physiology through the use of tiny, low-power, implantable sensors that have been made possible by the miniaturization of electronic components. These sensors allow scientists and conservationists to study animals in their natural habitats, without altering their normal behaviors by placing them in a lab environment for observation. Animal monitoring devices have their limitations, however, particularly as it relates to the number of sensors that can be included, and the lifetime of the battery. Adding sensors provides more useful data, but also increases the size and weight of the device. Pushed too far, the device will become cumbersome to the animal and will alter their behavior. More sensors also means a reduced battery life, which translates into less data being captured.

A research group at the Pacific Northwest National Laboratory has an interest in understanding how fish interact with fish passages at hydroelectric power plants, and how these passages stress fish physiologically. Recognizing that current monitors are too large for the fish that they wanted to track, and that the array of sensors is insufficient to capture the data they need, they set out to build a better solution. Called Lab-on-a-Fish , their monitor collects data about physiology, behavior, and the ambient environment, yet weighs only 2.4 grams, making it suitable for even relatively small fish. Through improvements in battery chemistry, electronic circuit efficiency, and power-saving algorithms the team was able to achieve an eight month battery lifespan.

Onboard sensors include an electrocardiogram and electromyogram to monitor the heart and other muscular activity. Accelerometers, magnetometers, and gyroscopes allow the Lab-on-a-Fish to detect specific activities. Information about the environment can be acquired via temperature, pressure, and magnetic field sensors. A high-performance, low-power, microcontroller unit supplies the processing horsepower. The communications and storage module contains a piezoelectric transducer, which is capable of transmitting data via acoustic signals at a distance of up to 400 meters, and 8 MB of flash storage to record sensor data when real time communication is not possible. The monitor is made watertight by encapsulating it in an epoxy.

The dry weight of 2.4 grams of Lab-on-a-Fish is equivalent to just 0.8 grams underwater, which made it suitable for use in the team’s in vivo validation tests in rainbow trout, white sturgeon, and walleye. Initial observations showed a strong relationship between heart rate and water temperature in walleye. Perhaps unsurprisingly, they also noted a relationship between heart rate and physical activity. The tests showed no adverse reactions or abnormal behaviors resulting from the implants, indicating that the device is suitable for long-term studies under real world conditions.

With the wealth of sensor data produced by the device, the researchers suggest that applying machine learning techniques may help to uncover more complex insights into the behavior and physiology of fish. The compact design, energy efficiency, and improvements in battery technology introduced by Lab-on-a-Fish may someday open the door to large networks of animal monitors in a number of species that assist us in better understanding the world in which we live.Lab-on-a-Fish device (📷: Y. Yang et al.)