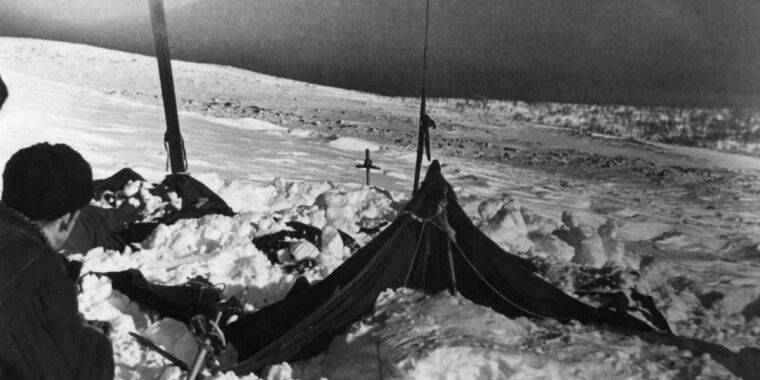 In February 1959, nine young Russian hikers perished during a cross-country skiing trek through the northern Ural Mountains. All were very experienced, so investigators were mystified about why the hikers had cut their way out of their tent in the middle of the night and fled into the wilderness to their deaths. Last year, two scientists published their hypothesis that the group had been surprised by a sudden slab avalanche. Now, those scientists are back to address the concerns of their critics in a recent paper published in the journal Communications Earth & Environment.

The “Dyatlov Pass incident,” as it came to be known, takes its name from the 23-year-old radio engineering student who organized the expedition, Igor Dyatlov. (A mountain pass near the site was named Dyatlov Pass as a memorial.) He and his fellow travelers—seven men and two women—were students at the Ural Polytechnical Institute, since renamed Ural Federal University. One member, Yuri Yudin, turned back on January 27 because his rheumatism had flared up, and the knee and joint pain was too severe to continue. He was the only one of the original 10 who survived.

According to diaries and cameras retrieved from the ill-fated campsite, the hikers began to move through the pass on the morning of February 1. Their goal was to set up camp for the night on the other side. But they lost their bearing because of snowstorms and poor visibility and ended up further west, on the eastern slope of Kholat Syakhl. Rather than backtracking to set up camp in a forested area just under a mile (about 1.5 kilometers) down, the team opted to dig a cut into the slope and pitch their tents there for the night. (Yudin speculated that Dyatlov, the team leader, likely didn’t want to lose the altitude they had gained during the day.)

The group was expected to return home on February 12, and friends and family initially assumed the party had just been delayed. But as the days passed, relatives requested a search-and-rescue party. On February 26, rescuers found the abandoned tent half-torn down and covered in snow. The hikers’ shoes and belongings were still inside. The tent had been ripped open from within, and nine sets of footprints led down to a nearby wood.

Rescuers found the first two bodies (Yuri Krivonischenko and Yuri Dorochenko) under a large Siberian pine. The men were shoeless and in their underwear next to the remains of a small fire. Three more bodies were found between the pine tree and the campsite (Dyatlov, Zinaida Kolmogorova, and Rustem Slobodin), posed in such a way to suggest they were trying to get back to the tent. Rescuers needed a full two months to find the last four team members (Lyudmila Dubinina, Aleksander Kolevatov, Nikolay Thibeaux-Brignolle, and Semyon Zolotaryov), since the bodies were buried under 13 feet of snow in a ravine within the woods.

The medical examination of the first five bodies concluded all had all died of hypothermia, although Slobodin had a small crack in his skull that was not deemed to have been fatal. But the four bodies discovered later seemed to tell a different story. Three had suffered fatal injuries: Thibeaux-Brignolle’s body had major damage to the skull, while Dubinina and Zolotaryov had major chest fractures, all requiring a force comparable to a car crash. Yet there were no external wounds that could be linked to the bone fractures.

The heads and faces of these four had also a good deal of soft tissue damage. Zolotaryov’s body had no eyeballs, Kolevatov was missing his eyebrows, and Dubinina’s body was missing the tongue, eyes, part of the lips, and some facial tissue. These gruesome injuries were suffered post-mortem. All victims had died six to eight hours after their last meal.

Over the ensuing decades, plenty of theories have been proposed to explain the tragedy. The initial suspects were indigenous reindeer herders in the area, called the Mansi, but only the hikers’ footprints had been found, and the force of the blows (and lack of associated soft tissue damage) was inconsistent with a violent Mansi attack. Later theories included the group panicking in response to infrasound; a romantic dispute; secret ballistic rocket or nuclear weapons tests; or a snow avalanche. None was deemed especially satisfactory, and the original investigation merely concluded the hikers’ deaths were due to “a compelling natural force.”