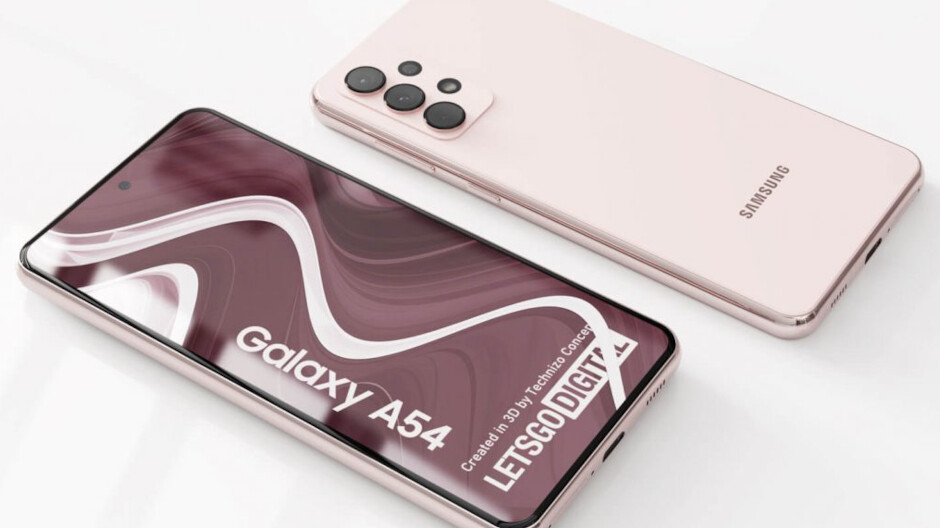 Samsung’s Galaxy A phones are lower-priced mid-range models that are equipped with large screens, viable cameras, and large batteries. A few days ago, Samsung released the Galaxy A53 5G equipped with a 6.5-inch Super AMOLED display sporting a 1080 x 2400 resolution, and a 120Hz refresh rate. A 5nm Exynos chip is under the hood and there are two different configurations including 6GB of memory with 128GB of storage, and 8GB of memory with 256GB of storage.

Concept render of the Galaxy A54 includes some minor cosmetic changes

There is a quad-camera system on the back and a 32MP front-facing selfie snapper. And yes, the device carries a big 5000mAh battery. Starting at $449.99, you can bring that price down by taking advantage of some deals including this one from Verizon.

Concept render of the Samsung Galaxy A54

This is all fine and dandy for now, but what about the Galaxy A54? Won’t there be a Galaxy A54 model? Unless something drastic takes place, just as day follows night, there will be a Galaxy A54 although it most likely won’t see the light of day until early next year. But that hasn’t stopped LetsGo Digital from publishing concept renders created by Parvez Khan of Technizo Concept.
One of the changes that Khan included with his concept renders (and the video that accompanies them) is a symmetrical bezel found on all sides of the display. The Galaxy A53 does have a little thicker bezel at the bottom of its screen. Similar to the Galaxy A53, these concept renders of the Galaxy A54 feature a 6.5-inch Super AMOLED display with an FHD+ resolution and a 120Hz refresh rate.

However, based on the smaller screen sizes for the Galaxy S22 and Galaxy S22+, LetsGo Digital says that it can not rule out the possibility of a smaller display for the Galaxy A54. The concept render does include an under-display fingerprint scanner and the same 32MP punch-hole selfie snapper (with an aperture of f/2.2) found on the Galaxy A51, Galaxy A52, and Galaxy A53.

A 5000mAh battery could power the Galaxy A54

Khan’s concept renders of the Galaxy A54 include a smaller camera bump and LetsGo Digital noted that the Galaxy A53 cameras match the Galaxy A52 array but with improved processing for low-light and evening shots. If that continues over to next year, the Galaxy A54 could sport a 64MP primary camera sensor, a 12MP camera sensor for the ultra-wide lens, a 5MP depth sensor, and a 5MP Macro lens for extreme close-ups.

Concept render of the Galaxy A54

The expectations are for the Galaxy A54 to come with a 5000mAh battery with 25W fast charging. Most likely, the same configuration options of 6GB RAM/128GB storage and

8GB RAM/256GB storage will be offered. And once again, we should expect Samsung to include a microSD slot for additional storage but there is no reason to expect the device to come with a 3.5mm earphone jack.

Verizon has a deal on the Samsung Galaxy A53

Since the Samsung Galaxy A54 wouldn’t be expected to be available until probably next March or April, you have a lot of time to think about your smartphone plans for 2023.