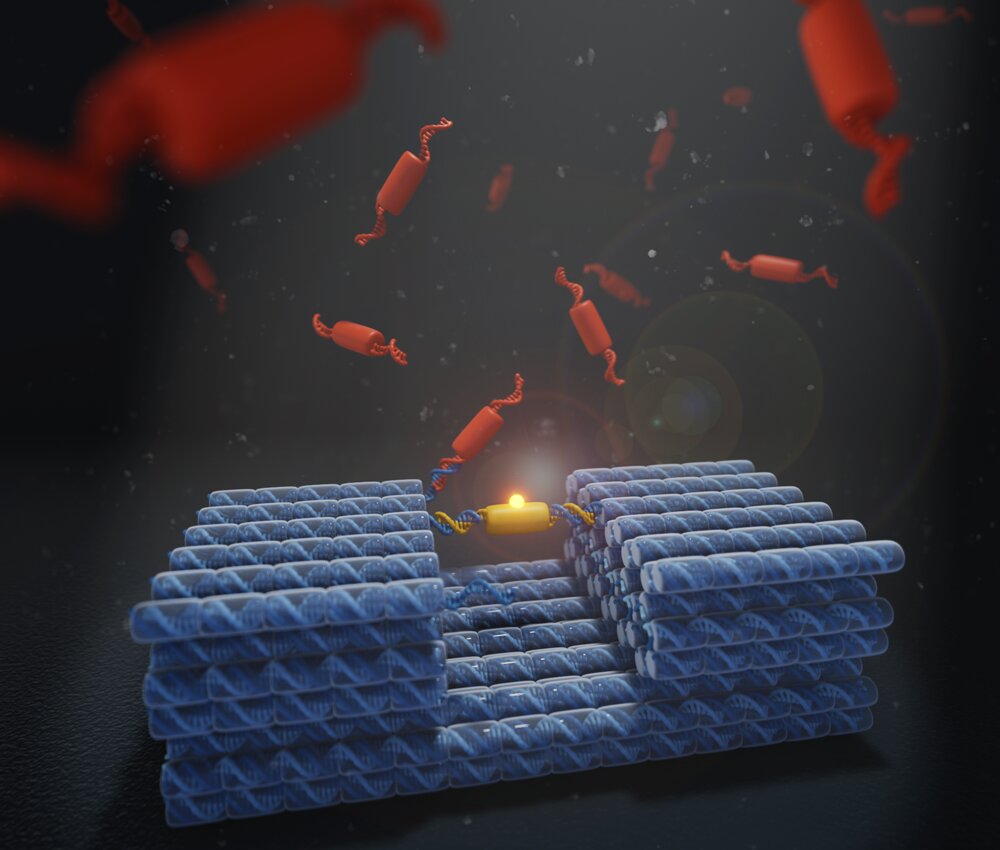 To withstand the challenging conditions within living organisms, molecular machines need to be durably constructed for continuous operation over long periods. At the same time, they need to adapt to different needs and to their changing environment by quickly swapping out molecular components to reconfigure the machinery.

“We adopted a synthetic biology approach to this problem by constructing an artificial nanoscopic machine using DNA and protein components. Being able to exchange subunits increases the functionality, just as we observe in biology,” said A/Prof. Lee, a UNSW School of Medical Sciences, and ARC Center of Excellence in Synthetic Biology researcher.

He and his team engineered molecular machines by folding DNA strands into three-dimensional shapes, a technique called DNA origami. They showed that their DNA nanomachines could carry both DNA and protein cargo, and would generally be compatible with other biomolecules and nanoparticles. The cargo binds at multiple sites to the DNA receptor, and can be displaced by new cargo via a competitive-binding process, when other cargo is present in solution.

An example of one of nature’s machines that embodies the paradox of stability and rapid exchange is a cellular machine that makes copies of DNA—the DNA replisome. The competitive exchange mechanism used by the replisome to simultaneously achieve these opposing properties was proposed in an earlier publication in Nucleic Acid Research from the team of Prof. Antoine van Oijen of the University of Woollongong, who is also a co-author of the current study.

A/Prof. Lee and his team have now brought this theory to life using DNA nanotechnology and protein engineering. “It’s the first synthetic system that has used this so called ‘multi-site competitive exchange’ principle,” he said.

Other mechanisms have been reported that confer the dual properties of robustness and rapid exchange, but until now, this dichotomy has not been possible with other biomolecules.

“So far, all molecular machines synthesized using DNA nanotechnology are actuated by the exchange of a DNA strand, but exchanging only DNA is a bit limiting. Our findings expand the functional complexity available for DNA nanotechnology,” said A/Prof. Lee.

He believes that there is a bounty of knowledge in nature for nanotechnology researchers to tap into. “Rapid exchange and maintaining high stability seem to be two incompatible states, yet there are so many of nature’s nanoscale machines that behave in this way.”

The field of DNA nanotechnology is still in its infancy. While there are many more design challenges to overcome for researchers to be able to realize the full potential of molecular machines, the capacity to create machines that can act autonomously and adapt to changes in the environment by replacing different biomolecules this is a big step toward a range of applications, from building of responsive smart materials to targeting the delivery of therapeutic drugs into diseased cells, and much more.