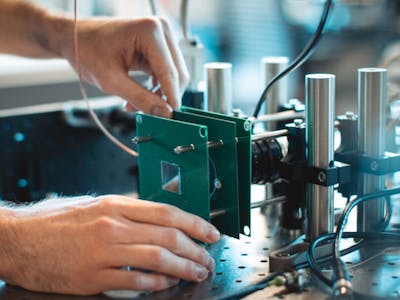 Whether it is the navigation or collision avoidance systems of self-driving vehicles, a satellite mapping the topography of Mars, or a submersible surveying the populations of each species inhabiting the extreme depths of the oceans, a single underlying technology is critical in each application. That technology is none other than LiDAR, which uses rapid pulses of laser light to determine the distance between objects. While LiDAR is an essential component of many modern technologies, its size and energy consumption requirements limit where it can be applied. Innovations in how LiDAR operates will be necessary to incorporate production-quality systems into large fleets of autonomous drones or lightweight robotic vehicles, for example.

As it turns out, one of the primary components adding to the bulk and high power consumption of current devices is a modulator, which rapidly switches a light source on and off millions of times per second. For this reason, a team of researchers at Stanford University developed a new type of modulator, which they call a longitudinal piezoelectric resonant photoelastic modulator . They did this with a thin wafer of the transparent crystal called lithium niobate, which they coated with a pair of transparent electrodes.

When an electrical current is passed through the electrodes, it causes the atomic structure of the crystal to change its shape and begin vibrating. These vibrations are predictable, and can be controlled with a high degree of accuracy. The vibrations also cause the lithium niobate to strongly modulate light. With the addition of a few light polarizers, a new type of modulator is created, which can switch light on and off millions of times per second. This modulator can be very small physically, and uses a tiny fraction of the energy that a traditional modulator requires for operation.

The researchers demonstrated one practical application of their invention in showing that the modulator can be integrated with a common off-the-shelf image sensor, such as the type you would find in a cell phone. In doing so, a very small, low-cost LiDAR system can be produced. It also offers new possibilities in terms of capabilities — using this setup, the team demonstrated that they could create megapixel-resolution depth maps, which is not possible with other LiDAR devices. High-resolution depth maps offer the ability to detect objects from greater distances, which may improve safety in self-driving vehicles. This also means that in the not-so-distant future, we may all have a 3D camera integrated into the smartphones that we carry around in our pockets.

With a bit more work, the researchers realistically believe that they can reduce the current energy consumption of the modulator by several hundred-fold. They also note that the crystal and electrode shape determines the frequency of light modulation, so by changing these factors, the frequency can be adapted to each individual use case. It will be interesting to keep an eye on this work in the future — bringing the technology behind some of today’s most impressive innovations to a whole new class of applications is sure to be exciting.Prototype LiDAR system (📷: Andrew Brodhead)