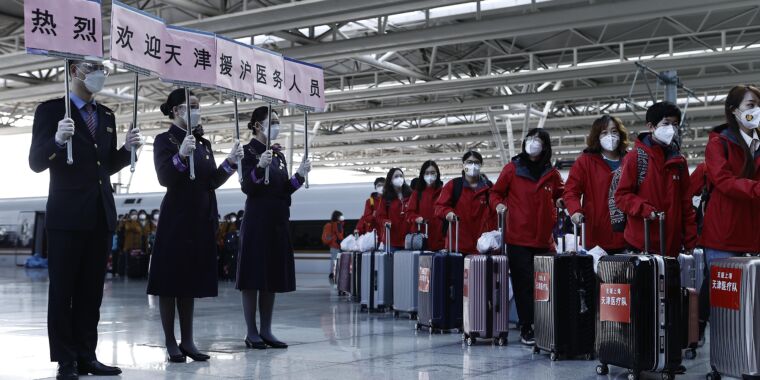 Health officials in China have dispatched more than 38,000 health workers to Shanghai as the city of roughly 26 million remains in an extended lockdown from a roaring outbreak of the ultratransmissible omicron coronavirus variant.

The megacity, which functions as China’s financial hub, entered a two-stage lockdown on March 28 that was initially intended to end April 5. But with nearly the entire city still confined to their homes or quarantine centers, officials say the lockdown will go on.

“The city will continue to implement seal and control management and strictly implement ‘staying at home’, except for medical treatment,” Shanghai’s government said on its official WeChat account, according to Reuters. There was no indication when the lockdown would lift.

On Sunday, China reported more than 13,000 COVID-19 cases, a 143 percent jump over the last two weeks and a record-smashing high for the country. Of those cases, Shanghai accounted for just over 9,000 of them—the city tallied 8,581 asymptomatic cases and 425 symptomatic cases Sunday.

Now, city officials are working to continue mass testing, sending health workers door-to-door to weed out cases. People who test positive or are close contacts of cases are sent to mass quarantine facilities across the city. Reuters reporters in Shanghai relayed frustration among residents over crowded conditions at quarantine facilities, where they fear the virus will only spread further. There are also reports of distraught parents who were separated from their young children after testing positive.

Reporters spoke to Esther Zhao, whose 2-year-old daughter was taken to a quarantine center after they both tested positive for COVID-19 at a hospital. Zhao spoke to Reuters reporters Saturday from the hospital. “There have been no photos at all… I’m so anxious, I have no idea what situation my daughter is in,” she said with tears in her eyes. According to Zhao, doctors at the hospital told her that city rules stated, “children must be sent to designated points, adults to quarantine centers, and you’re not allowed to accompany the children.”

According to posts on Chinese social media WeChat, children as young as 3 months old are being separated from their breastfeeding mothers. One poster called the policy “horrific.”

According to state-run news agency Xinhua, more than 38,000 health workers have been deployed from across China to help stamp out cases in Shanghai. More than 11,000 will be sent to support hospitals, while over 23,000 will help collect samples from residents for mass testing. The remaining 4,000 or so will help process the samples in testing laboratories.