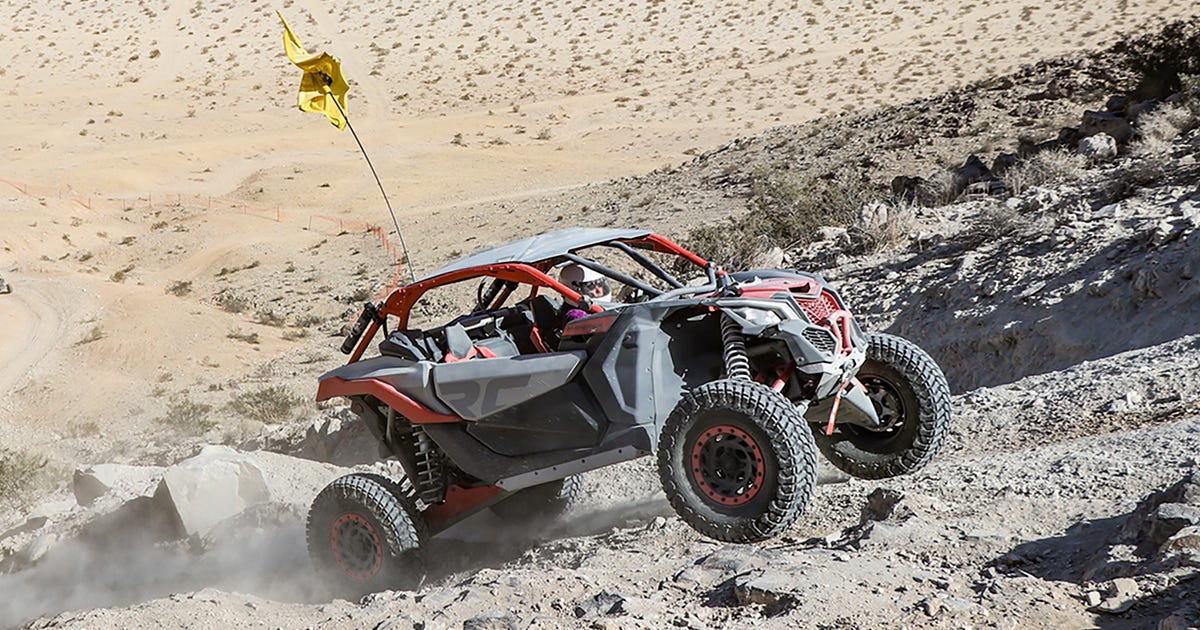 Much as I love off-roading, I’ve never really been a fan of side-by-sides. You know, those little souped-up, golf-cart-dune-buggy-like things you see zipping around the desert and sailing off into the dunes. The truth is, my hate is a product of jealousy; right off the showroom floor, a side-by-side is faster and more capable than any off-road rig I could build myself. But a recent day with the Can-Am Maverick helped me see the light.

Actually, it was two days, and for the first, I only rode shotgun. Can-Am let me tag along with professional UTV driver Hunter Miller as he prepared for the infamous King of the Hammers race in Johnson Valley, California — a week-long event where every kind of off-road vehicle you can imagine gets its turn in the spotlight.

With 16 inches of ground clearance, up to 24 inches of suspension travel, a short wheelbase, 200 horsepower and low gearing, UTVs like the Maverick are nimble and pretty much unstoppable. Miller’s race rig wears 35-inch tires, meaning it has no problem climbing up over rocks that are legitimately taller than I am. Miller’s race line choice is precise, putting the Can-Am on two wheels more than once, and often pointing us straight up at the sky, straight down at the ground or sideways to the point where rocks are 3 inches from my helmeted head. This is some next-level capability.

We aren’t doing this slowly, either. In a Jeep, a course like this would take hours. But in the Can-Am, we make it through Johnson Valley’s Sledgehammer and Jackhammer trails in about 15 minutes. Miller goes around a few more times to try some other racing lines, doing his homework for the big UTV race a few days later.

Speaking of which, when the race was all said and done, Can-Am swept the podium, with Miller coming in second. His brother, Cody Miller, didn’t make the podium but earned an eighth-place finish in the Unlimited series, where his side-by-side was up against big trucks with 40-inch tires, V8 engines and ridiculous amounts of torque. He was the first UTV to finish that grueling race.

A week after the race, it’s my turn to drive the Can-Am. The Maverick X3 has 16 different trim levels, but I’m in the X3 X RC Turbo RR, which is Can-Am-speak for a UTV that’s built for rock crawling. Buyers can also opt for trims that are specifically built for the desert, mud or dunes, with 64- or 72-inch widths and a choice of two or four seats. My two-seat tester is exactly like the one Miller used during the race practice, just without all the safety equipment and with smaller, 33-inch tires.

When I take off, I immediately head for Heartbreak Hill — a trail I’ve looked up at from behind the wheel of my rear-wheel-drive, lifted Miata and promptly found an alternate route. This trail is seriously steep, with soft sand at the bottom, loose rocks in the middle and large rocks at the top. Unfazed, the Maverick walks right up it. I hardly even have to work at all.

Like most UTVs, the Can-Am Maverick is equipped with a continuously variable automatic transmission. I tend to hate the application of CVTs in road cars, but in a UTV, it works. The CVT can maintain a consistent engine speed even as the vehicle itself is traveling at different speeds, so climbing the steep terrain is easy. Before I know it, I’m up and over the ridge. No broken hearts here.

The Maverick weighs just a smidge over 1,800 pounds, and with 200 hp on tap, it’s quick to say the least. Desert whoops that would make my little Miata shudder and scrape, the Can-Am just bombs through, no problem. I guess that’s what happens when you have adjustable Fox bypass shocks, 2.5 inches in the front, 3 inches in the rear. This RC Maverick does such a good job in the whoops I’m curious to see how much faster I could go in the dune-specific UTV. Even so, my tester has live valve shocks that monitor wheel position, speed and acceleration and can go from comfy-couch soft to full-bore-racing firm in just 17 milliseconds.

The Maverick basically goes against every cardinal off-road driving rule I’ve ever learned. “Always stop in soft sand pointing downhill, or at least on flat ground.” Nah, this thing is so light and has four-wheel drive. Stop anywhere you want; you’ll get going again. “As slow as possible, as fast as necessary?” Nope. You can carry speed or not. Either way, you’ll get to the top. You can carve around dune bowls all day long and not worry about the rear sliding out from underneath you.

The only thing that’s hard to get used to is the Maverick’s steering. I have to let it do a bit of a hula dance in my hands. If I try to really grip and control every little input I’ll likely wear myself out after 4 miles. It’s all about maintaining a loose grip and having a lot of trust in the UTV. It’s tough to do, but I quickly learn the Maverick tracks straight and fast on these trails.

It used to be that, if you wanted an off-road-specific toy, you had to build it yourself, putting in a ton of money and garage time to make your dreams come true. Now you can get one of these machines for relatively little scratch. While my tester is $31,599 excluding an unpublished delivery fee and other surcharges, you can snag one with a smaller 120-hp engine for a smidge over $20,000.

If you’ve never wheeled off-road before, the Can-Am will be way above your skill level. I recommend finding a local group to go out with so you can talk to other drivers and learn from them before heading out on your own. Take a class led by someone credentialed through the International Four-Wheel Driver Trainers’ Association and familiarize yourself with Tread Lightly principles and trail etiquette.

Driving and riding in the Can-Am Maverick allowed me to ditch my stodgy preconceived notions about what an off-road rig should be. It’s some of the most fun I’ve ever had in the dirt, with the reassurance that almost nothing could get in my way.


Get the Roadshow newsletter

See the latest cars and automotive trends from supercars to SUVs. Delivered Tuesdays and Thursdays.